Londonist Film Club: The Lodger - A Story of the London Fog

By london_alice Last edited 172 months ago
london_alice Londonist Film Club: The Lodger - A Story of the London Fog

In this series, we look at films with one thing in common: London. Our only rule is that the films must have either the word London or a London place name in the title. Other than that, any film is fair game. 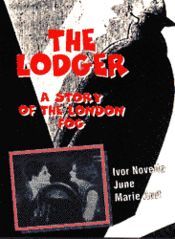 This is most likely the oldest film we'll cover in this series. The Lodger is Hitchcock's earliest surviving film, and is a silent thriller set in London. You might want to avoid picking up the version we did though - as this film is 81 years old, it's in the public domain, which means it can be released by anyone. Normally the music in the background of a silent film will compliment what's happening on the screen: suspenseful music for suspenseful moments, cheerful music for cheerful moments. You get the idea. Not the version we saw. It's as though someone pressed play on a CD called "The Most Famous Classical Music Ever" when the movie started and pressed stop when it ended. This led to some, shall we say, "interesting" musical accompaniment.

The Lodger is a creepy tale of the search for a serial murderer in 1920's London. A killer known as "The Avenger" is killing one blonde woman each Tuesday, and has been identified as only tall with his face covered with a scarf. Daisy, a model (or "mannequin" as she's called in the credits), is constantly refered to has having "golden hair" and is justifiably worried. She should be safe though, because her boyfriend is a detective, and is after the Avenger.

During all this murder and mayhem (accompanied by "Pomp and Circumstance", which is somewhat less than appropriate), a lodger, played by Ivor Novello, rents a room at Daisy’s house. Her landlord parents are immediately suspicious as he turns up wearing a scarf. Could he be the killer??

Daisy, of course, almost immediately dumps her parent approved policeman boyfriend and falls in love with the Lodger, which leads her poor parents to suspect that she’ll be killed at any moment.

It’s a very Hitchcockian plot, with lots of the wrong man is suspected, innocent men are accused, murders in an ordinary neighbourhood elements. But it’s not very London. For all that it’s set in London, there was only one shot of a London landmark (an ominous Big Ben shot). To be fair, there may have been lots of 1920’s landmarks that we just didn’t recognise, but it’s more likely that this was filmed entirely on a sound stage and there were no exterior shots at all. There are a few "wow, this was a long time ago" moments - The Lodger pays £1.20 for his weekly accomodation, including meals. Wouldn't that be nice?

To be perfectly honest, and we always try to be perfectly honest, we didn’t make it all the way through this film. We came close, but the soundtrack proved too distracting. Still, it’s worth checking out. Silent films are always fascinating, as they really make you aware how little we rely on dialogue to understand the relationships between people, and this is a good one. There are different versions though, so try to get one without the horrible, awful, music.