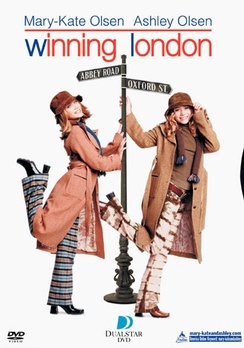 We’re obviously aware of the Olsen twins phenomenon. That is because we have not been living under a rock since 1987, which is when the Mary Kate and Ashley first burst onto American TV screens in Full House. They’ve essentially been famous for their whole lives, and appeared in no less than 15 movies together before 2004. And all of those were adorable twin movies. And most were straight to video.

This is a fine example of the Olsen twins film of that period. It’s very poorly written, strangely edited, has several moments that feel more like they should be in tourist videos, and has phenomenally bad acting. But it does have two cute lead boys, and they each fall in love with an Olsen twin. If we were eleven year old girls, we would have loved it! Cute boys! Sigh!

The plot, not that there is much of a plot, focuses on the model UN. Chloe (Mary Kate) is a competitive school nerd whose brilliance giving a speech stating that "free speech does more harm than good", has won her model UN team a spot at the international model UN thingy in London. She has straight hair, so you can tell she’s the serious one. One member of her team can’t attend, so her boy-crazy sister Riley (Ashley), who has curly hair which indicates her lack of seriousness, takes his place in order to declare her love to Brian, a member of the team. And they’re off to London!

This is tourist guide London at its finest. The twins and their friends travel to everywhere you would possibly go if you were visiting London. And, just in case we didn’t catch the dialogue telling us where we were, several of the locations are helpfully named onscreen with captions. Um, okay. That totally doesn’t seem weird. They spend about ten minutes at the Tower of London, and nothing happens. It’s just 10 minutes of tourist video. They also visit the Globe Theatre, which apparently anyone can just stroll into have sword fights on stage. And we’re not really sure anyone fact checked the script, because the "cute boy" who’s giving them the tour says that it’s where "Shakespeare put on all his plays". Um, no it’s not. It’s a replica of where Shakespeare put on all his plays, dumbass.

Speaking of the cute British guy, James, that Chloe falls for, can we talk about his accent for a moment? If you’re going to have practically no British people in your film, why would you not cast actual British people? We enjoy Jesse Spencer on House, but he’s Australian, and his British accent is pretty poor. He was also 22 at the time of filming, compared with the Olsen twins’ 15. We’ll let the creepiness of that slide for now.

We do want to give a special mention to the spectacularly blatant product placement in this film. We’re guessing it was entirely funded by sponsorship, because literally not a second passes without some product front and centre. The films starts with an AOL search page, then a Virgin Atlantic plane pulls the title onscreen, and then there are Coke cans, Doritos bags and Hilton hotels as far as the eye can see. It’s kind of impressive, actually.

It’s best not to focus too much on the plot of this film. The whole model UN thing gets wrapped up pretty stupidly, and we’re not even going to talk about the polo match. Oh, and Riley tells Brian she loves him and James and Chloe put aside their model UN competitiveness to find love. This is not a good film, people. It’s very, very bad. We’re actively trying to block out the scene where Chloe learns to speak Cockney. Shudder. And the film actually ends with all the main characters riding horses into the sunset in a park. But London does look lovely in it. So, that’s something, we guess.