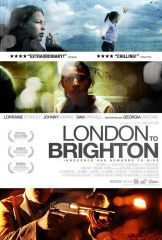 This is a very different film from most set in London. It’s not a dreamy rom com, filled with glamorous shots of famous London sights. It’s not an over the top spy caper with fights in unrealistic but very familiar places. And it’s not a movie about Guy Richie’s cheeky chappy underworld full of Mockney geezers - although the London underworld is world the movie is set in. But it’s set in a London that’s very real. There are no brashly hilarious gangsters, just people struggling. Both the criminals and victims are scared and angry and running away from something. Let’s just say that this is not a film the London tourist board will be using to advertise our fair city any time soon.

The film begins with a crying Joanne and a badly beaten up Kelly bursting into a public toilet, somewhere in central London. Kelly leaves Joanne to scare up some food and money, and once she’s returned, the pair board a train to Brighton. What they’re afraid of, and running from, is slowly revealed through flashbacks throughout the film. Cleverly, it’s Kelly’s face which provides the clues whether we’re in the present day or the past, as the flashbacks are set before she was beaten.

Derek is Kelly’s pimp, and under orders from the higher in the criminal food chain Stuart, sets about tracking the two down. It turns out that Kelly met Joanne, an 11 year old runaway, when she was ordered by Derek to find a young girl for one of his clients. The client was Stuart’s father, who is now dead. Both Stuart and Derek want to find Joanne and Kelly to find out exactly what happened. Although in some ways this is a hard film to watch, it’s completely compelling and we were on the edge of our seats for the climactic final scenes.

The film is set about half in south London and half in Brighton. It’s a gritty and realistic London - full of greasy chicken shops and studio flats. The characters don’t even take the Tube - they’ve got no money, so even buses are a stretch at times. It’s a scary London, one that isn’t very appealing, but definitely exists. This is a bleak movie, not full of much hope, and it's heartbreaking at times - especially in the scenes where we remember Joanne is still just a kid. But, all the same, it's one that we absolutely recommend.

London Landmarks Spotted: None. It’s not that kind of film.