In this series, we look at films with one thing in common: London. Our only rule is that the films must have either the word London or a London place name in the title. Other than that, any film is fair game. 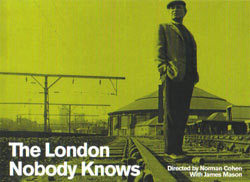 Delving beneath the surface of tourist London, based on a book of the same name by Geoffrey Fletcher, this is both a period gem and a bonkers piece of documentary making. James Mason, in flat cap and blazer, leads us around some of the less salubrious areas of late sixties London focusing on the changing times, the working class and the dilapidated side of the fashionable capital. His delivery is so dry he's less tour guide, more a faintly bemused benevolent uncle, striding about his property, writing off rebuilding efforts since WW2 with a "yick" and sagely pointing out that, when it comes to disused Victorian public conveniences, all men are equal before the lavatory attendant.

Mason's personal charms and quirks aside this is a fascinating glimpse of bygone London life. There are gas lamps and a lamplighter; access into Cardinal Cap Alley is still open on Bankside, as the Globe crowds haven't arrived to spoil it yet and the power station is still a power station. Buskers aren't living statues but eccentric ex-music hall types who sing and jig and when asked what made them choose the busking life, reply "I'm a genius and I felt I'm psychologically unfit for normal work."

Intermittently, documentary is discarded in favour of whimsical and trippy sequences such as a skit on the former Behr and Mathew Egg Breaking Plant with steamrollers and explosive devices shattering shells "Carry On" style and a borderline psychedelic excursion down Chapel Street market repeatedly zoning in on a box full of wriggling live eels replete with bubbling mad electronic soundtrack.

Contemplating death in London, there's a maudlin trip to a fancy undertaker and a stark visit to a rambling graveyard, accompanied by the tune we want played at our funeral, "Ain't it grand to be bloomin' well dead". Death segueways into poverty and a sensitive Mason chatting to Salvation Army hostel residents about what they have for breakfast and why they're down on the luck. Suddenly it's not funny anymore as the cameras seek out dead eyed street drinkers, huddled together over a bottle, or brawling lurchingly. We're left with a lusty street preacher, warning the end of the world is nigh.

Presented on our DVD as a double bill with the totally swinging, whimsical musical-dream-love story about a 60s boy dandy who falls in love with a model in a poster and cycles round leafy North London in pursuit of her, singing, The London Nobody Knows is a slice of London life, that's rarely seen and a rare take on documentary making.