After a bit of a break, Londonist Film Club returns, and once again, we're looking at films with one thing in common: London. Our only rule is that the films must have either the word London or a London place name in the title. Other than that, any film is fair game. 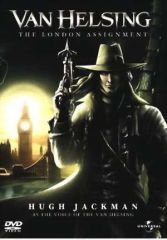 This is an animated prequel to the 2004 Hugh Jackman film Van Helsing. And yes, like you, we had no idea it even existed. It’s the story of Van Helsing’s pre-vampire days, when he travels to London (“a city of almost four million people”) to deal with a little problem with Dr. Jekyll.

Now, this Londonista has to confess to never having read The Strange Case of Dr. Jekyll and Mr. Hyde, so we can’t vouch for how accurate the cartoon is. But, since it includes Van Helsing, we’re guessing it’s not very accurate at all. That’s just a guess though.

We thought this was a full length animated film when we got it, but it turns out to be just over half an hour long. Which means that the plot zips along at a pretty good pace. There’s none of that irritating stuff like “plot development” or “well developed characters”.

There’s an odd plot twist where Dr. Jekyll is treating an elderly Queen Victoria, gives her a potion that causes her to become young and lose her memory (but not the memory of her being queen, just how old she is and everything about her past, if that makes sense), and then he plans to marry her. All while Mr. Hyde is killing women throughout London. And can we just say that it seems a little inappropriate for young Queen Victoria to be showing that much cleavage? She’s royalty! Surely losing her memory wouldn’t have turned her trampy.

There is quite a cool fight scene between Mr. Hyde and Van Helsing on the underground, which was quite fun. Lots of trains crashing. And Buckingham Palace and an under construction Tower Bridge get some action as well. Other than that, they really don’t show very much of London. Which strikes us as silly, since it’s animated. It’s not like location shots or special effects would have cost money!

Of course, Van Helsing rescues Victoria from Mr. Hyde (and actually uses the line “lie back and think of England” while doing so - inappropriate!!), and they seem to fall in love. Maybe. That bit’s a tad confusing. And as they have a bit of a smooch, she ages and he gets grossed out because he’s kissing an old lady. Seriously, we couldn’t make this stuff up.

We’re not going to lie. This is not a good movie. But it’s not a bad animated prequel to a moderately successful live action movie. So, we’ll give it that. But really - they couldn’t have drawn in a few shots of St Paul’s or Westminster Abbey or any of the other bajillion recognisable London landmarks? Colour us disappointed.