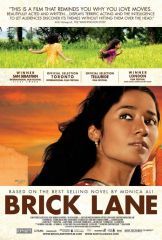 Brick Lane has an awful lot to live up to. Based on Monica Ali’s award winning (and controversial) book, there were an awful lot of expectations about the film, both good and bad. Of course, it can’t meet them all. But for a film that wasn’t actually allowed to film in Brick Lane, it felt fairly authentic to us.

The film follows the story of Nazneen (Chatterjee), who moved to London for an arranged marriage to the much older Chanu (Kaushik) when she was 17. She’s now been in London for sixteen years, and lives a very sheltered life. She spends most of her time at home, in a council flat near Brick Lane, and pretty much only leaves the house to do the shopping. She and Chanu have two daughters, and Nazneen lives a life of quiet unhappiness. She wants to return to India, but her husband’s general ineptitude with money means that she’s stuck in London.

To earn some extra money, Nazneen gets a job doing sewing in her home, and meets the dreamy delivery boy, Karim. Over the weeks, she and Karim get closer and finally fall in love. Of course, that’s tricky when you can’t meet at a hotel, so they carry on their affair under Chanu’s nose, as he becomes gradually more aware of it.

But then everything changes, as 9/11 happens, and the relationship between all three main characters changes. Chanu decides that his family will head back to Bangladesh, Nazneen feels more at home in London, and Karim gets involved in with a group of militant Muslims and gradually gets more and more extreme in his behaviour and way of dressing.

In the film’s only moment set outside of east London, Chanu decides to take his family to see London’s sights. He last saw Big Ben in 1979, and wants to see more sights before he leaves. They walk through Regent’s Park and get their photo taken in front of Buckingham Palace. And that’s it. Other than the area immediately surrounding Brick Lane, that’s the only bit of London we see. And for a lot of people living in London, that’s probably quite true of how they live their lives. After all, most of us don’t see the top tourist sites every day in our everyday lives. An emotional moment between Nazneen and her eldest daughter takes place at Liverpool Street Station, and that’s it for the big recognisable places in the film.

Brick Lane ends on a bit of an ambiguous note, with Chanu heading back to Bangladesh and Nazneen staying in London despite ending her relationship with Karim. It’s an engaging film, and although it’s not perfect, we liked it.