Welcome to our new bi-weekly series, in which we look at films with one thing in common: London. Our only rule is that the films must have either the word London or a London place name in the title. Other than that, any film is fair game. 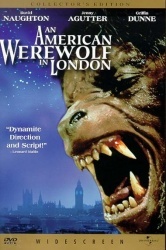 An American Werewolf In London (1981)

Our first film is probably the first that comes to mind for most people when they think of London films, so it only felt right for it to be the first in our series. And it’s a delightful London film. It also teaches us the very important lesson that we should always listen to quirky locals when they tell us to keep to the main road. Disregarding this information always leads to bad news.

This is what David and Jack learn, in a very painful and horrible way. They’re two young Americans starting their European tour in the Yorkshire moors. After seeking shelter in a deeply creepy local pub, The Slaughtered Lamb, they manage to alienate the locals and get themselves lost on the moors under the full moon, because they didn’t keep to the main road. And what happens then? They get attacked by a mysterious animal, which kills Jack and wounds David. See what happens when you don’t listen to the locals?

David doesn’t actually arrive in London until the 19 minute mark in the film, but even then, for most of his time in London, he’s is either in the hospital or in his new girlfriend’s flat. It’s not till he gets all werewolf-y that we really get to see our fair city. (Whoops, spoiler! David turns into a werewolf!)

And we really get a good look at it as he races through the city, killing Londoners outside a mansion block, on the Thames with Tower Bridge artfully lit in the background and, most memorably, in Tottenham Court Road Station. He then wakes up, naked and de-wolfed, in the London Zoo, runs through Regent’s Park and past the Tower of London to get home.

And, of course, there were also plenty of black cabs and double-decker buses. Just to prove we’re really in London.

There were also a few hints that London may have changed in the past twenty seven years. A black cab ride dropping off the doomed young couple to their dinner party cost £1.50. One pound fifty. Can you even take the bus for that today?

Transport cost outrage aside, this is not only is this a great London film, but it’s a great werewolf film. Which means it’s a-okay with us. We really enjoyed this film, and would happily recommend it.