In this bi-weekly series, we look at films with one thing in common: London. Our only rule is that the films must have either the word London or a London place name in the title. Other than that, any film is fair game. 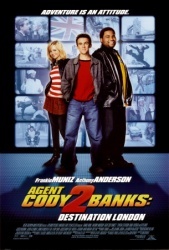 From the iconic London film, we move on to the slightly silly. If you’re not familiar with the Agent Cody Banks series, you might be tempted to think this might be a good film. We imagine you might think it’s great if you’re ten, but didn’t quite measure up for us.

Frankie Muniz stars as a young Cody Banks, a teenager working for the CIA. While at CIA summer camp (seriously), his camp director / CIA boss turns all evil and Cody is sent to London undercover as a member of an international youth orchestra (seriously) to stop the rogue camp counsellor taking over the world by implanting brain-controlling tooth implants in the world’s leaders (seriously). Oh, and the camp counsellor is played by Keith Allen, with an American accent (seriously).

For a film supposedly set in London, Cody doesn’t seem to spend much time actually in London. An awful lot of the film is set at the country house where the orchestra is staying, and there’s no way it’s in London.

There are an oddly high proportion of meetings held on the South Bank in locations about five seconds from each other, which leads us to believe they couldn’t be bothered finding more than one location. Cody and his CIA cohorts, who are “banished” to the backwater of London for bad behaviour, have a secret meeting inside a pod of the London Eye, for some unexplained reason. And the bad guy headquarters seems to be located in the Tate Modern. Which doesn’t really make any sense, but perhaps the producers thought it wasn’t a very recognisable location. Hmmm. We also question the big action scene set inside a bottled water warehouse near St. Pauls (seriously). Were there no London-ish locations they could have used for this? We think a climactic fight inside the weapons room at the Tower of London would have been much more exciting.

Oh, and we almost forgot to mention the very odd pseudo-romance between Cody and the Scotland Yard agent played by Hannah Spearritt, who is also undercover at the international youth orchestra. Except, she’s not a teenager because she has a real job at Scotland Yard with an office and everything. She wears suits! So why she’s set up as the romantic interest for a sixteen year old is a little baffling to us.

We’re not even going to get into the end, but we’ll just leave you with the tidbit that it features the Queen (seriously), dancing to an improve version of “War”, performed by the youth orchestra (seriously), and the fact that Madonna is one of the film’s producers (seriously).

Now that we think about it, maybe this falls into the “so bad it’s good” category.