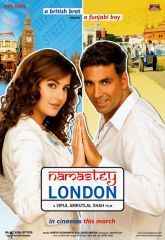 This is our first Bollywood film on Londonist Film Club, and we’re not quite sure how we felt about it. It’s very Londony, that’s for sure, but it’s also very cheesy. We know Bollywood is supposed to be cheesy, but surely this was a little over the top? Namastey London is the story of Jazz, a British born Indian girl living in London. She’s dating her boss, Charlie Brown and her dad doesn’t approve because he wants her to marry an Indian boy. After she thwarts a date arranged by her father, they have a huge fight, which he hopes to make up by taking her on a trip to India. She’s never been, so she accepts, not realising her father hopes to find her a husband there. Just before they leave, Charlie proposes, but she doesn’t answer.

And that’s only the first half hour. In India, Jazz meet Arjun who falls instantly in love with her. He’s also deeply creepy and almost twice her age, but we don’t think you’re supposed to notice that. Jazz’s father arranges for the two of them to be married, despite the fact that she outright says she has no interest in him. Instead of just turning him down, Jazz comes up with a ridiculous plan with the help of her friend Imran. She goes through with the ceremony, tells Arjun she wants to wait until they are back in London and know each other better before consummating the marriage, and then returns to London. Once they’re back, she tells her family and Arjun the wedding isn’t valid and not recognised in the UK, and accepts Charlie’s proposal.

Of course, Charlie turns out to be a racist jerk, and Arjun wins her over with his creepy devotion. He stands in for Charlie at dance lessons, which are oddly held at the Tate Modern. He makes dramatic speeches, and tells her about a million times that he loved her the first moment he met her and will never love anyone else. He’s very persistent.

The London in this film is tourist London. Not even tourist London, really. The tourist London imagined by people who have never actually been to London. The London Eye is featured at least nine times (with two different scenes actually in a pod), Tower Bridge is seen at least five times, and there are literally dozens of shots of the Thames. Jazz’s family lives in a gigantic house, which is supposedly in London. If it actually were, it would cost millions and millions of pounds. Charlie lives in a massive country estate, as does Imran’s girlfriend Susan. Because all white people are phenomenally wealthy and posh, you know. They’re also racist. Just FYI. Oh, and Charlie impulsively brings Jazz to a meeting with Prince Charles at Buckingham Palace. As you do. Very realistic.

Of course, Jazz is won over by Arjun’s persistence and leaves Charlie at the altar. But you don’t feel bad for him, because he’s a racist jerk. Despite the presence of many, many song and dance numbers, the film doesn’t end with one, which we found deeply disappointing.

We are not Bollywood film experts, so can’t make any claims for how this holds up against other Bollywood films, but we found it to be a bit hard work. It’s just not as much fun as it could be. And seriously, Arjun is just creepy. Not really what we’re looking for in a romantic lead.