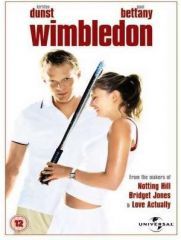 Wimbledon is the first of our films to look at a London place name, and it seemed a good place to start. We have a confession to make about this film - we saw it years ago and didn't enjoy it much. Which is very odd, because this Londonista has a love of both the romantic comedy and the sport film. This film, which encompasses both those elements, should have been a winner. But, upon watching it again, we found ourselves thoroughly enjoying it.

For a film set at the London's most famous sporting event, surprisingly little of the film takes place in London. All the tennis does, obviously, as well as a few rom-com moments of parties and walks in the park, but a whole lot of the action is set Brighton, where Peter lives.

Peter (Bettany) is a faded tennis star, once rated 11th in the world, but now a mere 119th. He's about to retire and take a job as a tennis pro, but he's managed to snag a wildcard entry into Wimbledon and have one last go before he gives up his pro career. He meets Lizzie (Dunst), a rising star at her first Wimbledon. Despite the protests of her father (Neill), the two fall in love. Awwww.

Of course, it's not that easy. Love is great for Peter's game and he finds himself winning match after match. It's horrible for poor Lizzie, however, and she doesn't deal particularly well with losing. The romance part of the film is cute, and Dunst and Bettany have reasonably good chemistry. (As a side note, it is odd to see two blonde leads. You really don't see that often.)

We were very amused to see James McAvoy in a pre-fame roll playing Peter's slightly sleazy brother Carl. He's a part of Peter's ridicously quirky posh family (Dad lives in a treehouse because Mum, who enjoys gardening in silly straw hats, was caught snogging another man), and really is a highlight of the film as he constantly bets against Peter and inadvertantly makes his life as difficult as possible.

But this film isn't really about the romance - it's about tennis. And it's a surprisinlgly good tennis movie. Even if you don't like tennis, it's still very exciting and tense. And it really does capture the Wimbledon mania that gets the country in a frenzy every year. Can you imagine the excitment if an English player came out of nowhere to be in the Wimbledon final? The country would go crazy, and so the standing ovation Peter gets from the entire staff of the Dorcester before the final, which initially seems ridiculous, really isn't that far out of the realm of possibility.

The London these characters enhabit is very different from the one you and I live in. They stay at the Dorchester (which is about £300 a night), drive everywhere either in sporty convertibles or chauffeured cars, and attend champagne parties on the London Eye. Oh, they do eat at Wagamama, which is probably the most normal thing Peter and Lizzie do in the whole film. But these characters are rich and famous, so you can't really complain. They do manage to go for a walk through a park at night, but for the life of us we couldn't figure out which one it was.

As a London movie, this is not the greatest. It's probably a better Brighton movie, actually. But it's a very good tennis movie. And a passable romantic comedy. So, if you like either of those types of films, this is likely a film for you.