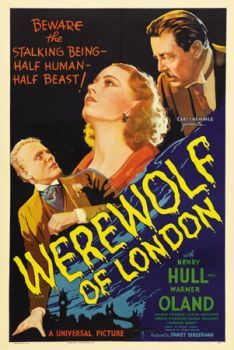 This was the first Hollywood werewolf movie ever, and it’s set in London. Doesn’t it make you proud? It’s a bit different from the werewolf movies we’re used to today - there are no silver bullets and no mysterious gypsy curses. Just a simple botanist searching for a mysterious flower in Tibet, who gets bitten by a strange wolf like creature under the full moon. Who hasn’t that happened to?

Dr Wilfred Glendon manages to bring the flower back to London, but at a cocktail party he meets a mysterious fellow botanist, Dr Yogami, who alludes to a mysterious meeting in Tibet, and the flower Wilfred brought back, which has the power to temporarily halt the werewolfication process. Because, of course, Dr Yogami was the werewolf who bit Wilfred, and he was also on the lookout for the flower, in order to control his own werewolf tendencies.

According to Yogami, unless a werewolf uses a blossom in some way when there is a full moon, he will turn into a werewolf and he must kill someone before dawn or remain a werewolf forever. And, as a fun added twist, werewolves instinctively “seeks to kill the thing it loves best”.

Which is a problem for Wilfred. He’s married to Lisa, but having a few problems. She’s reunited with a childhood friend, Paul, and Wilfred is having a few jealousy issues. He may be jealous, but certainly doesn’t want to kill his wife.

So, instead, he kills a blonde girl in a back alley, and a blonde shameless hussy who tries to lure a zoo guard away from his loyal wife. Clearly, they deserved it. Blondes. Nothing but trouble. We did find it delightful that, even while a werewolf, he still wears a hat, coat and scarf while going out. Even werewolves can be gentlemanly.

Paul’s uncle works for Scotland Yard, and although Paul tries to convince him that it’s a werewolf wreaking havoc on London, he believes it to be a normal wolf, escaped from the zoo.

Wilfred finally attacks Lisa, but she gets through to him and he doesn’t kill her. But just as he’s about to leave her alone, he’s killed by Scotland Yard. Sad for him. He apologies just as he dies, and everyone is all emotional. Because apparently a deathbed apology is enough to make the previous killings a-okay.

This is a 1930’s studio film, so there are no location shoots. Lisa’s aunt does live “near the Thames” in the worst area in east London. Apparently, they’ll “knife you for a shilling”. The only location we actually is a set of the London Zoological Garden, which we will assume is the Zoo, and count it as London location.

For a London film, it’s not fantastic. For a werewolf film, it’s pretty great. The effects aren’t bad for 1935. It’s not scary, really, but that’s only because it’s 74 years old. We enjoyed it and would highly recommend it as addition to your werewolf viewing.