A Guide To Alternative London Maps 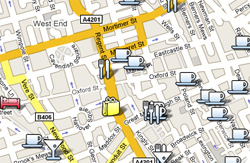 Prompted by a reader comment last week, we thought it'd be handy to have a directory of websites containing maps of London.

First, a special mention to two sites. MapTube London acts as a mapping platform, allowing you to upload your own GoogleMaps and overlay them on others. We've listed a few of the better maps from this site here, but many more are available. Secondly, a preposterously good source of online historic charts (well over 100) can be found at London Old Maps.Please do speak up in the comments if you know any good ones we've missed, and we'll add 'em to the directory.Map DirectoryAntony Gormley: The London locations of the sculptor's work (Londonist)Books set in London: Gorgeous interface showing >400 novels set in the capital (Get London Reading)Buildings that have moved: From London Bridge to Wren churches (Londonist)Charles Barry: What else did the architect of the Palace of Westminster build? (Londonist)Charles Dickens: Interactive but low resolution chart of Dickens' homes and characters (Dickens' London Map)Charles Holden: Architect of many Tube Stations and Senate House (Londonist)Crime Maps: Check the crime rate for your local area (Metropolitan Police)Deprivation levels: (MapTube)Eduardo Paolozzi: The London locations of the sculptor's work (Londonist)Erno Goldfinger: Trellick Tower was not his only creation (Londonist)Film Locations: Slightly annoying Flash map, but informative nonetheless (MovieLondon)Free London: Museums, galleries, talks, etc. with no entry fee (Londonist)Free Wifi in London: All the cafes, bars and other venues with no-charge wireless access (Londonist)George Gilbert Scott: Architect of the Albert Memorial and St Pancras (Londonist)Heathrow history: Charting the development of the village of Heath Row (Cassini Maps)Historic London: Selection of maps (hundreds of 'em) from 16th Century onwards (London Old Maps)Historic Tube maps: See the development of the Tube going back to 1908 (London Tube Map Archive)IT Awareness: Which boroughs are most online? (MapTube)Jacob Epstein: Controversial sculptor's work in London (Londonist)James Patterson: Trace the epic walking route of an obscure Victorian Tourist (Londonist)Mapping platform: Upload your own maps and superimpose them over others (MapTube London)Memorials: Much, much more than blue plaques (London Remembers)Nicholas Hawksmoor: Pupil of Wren, muse of Sinclair (Londonist)Open Source: Wiki style mapping project free of copyright limitations (OpenStreetMap)Personal Moments: User-generated map of love, loss, fate, coincidence and other emotive experiences (Museum of London)Population Density: (MapTube)Property: Great tool where you input your place of work, distance you want to travel and amount you want to spend, to get a map of all the parts of town that might be suitable (Nestoria).Street Markets: Odd fact - more than half of them begin with a B or C (Street Sensation)Street level view: See anywhere in central London with street level panoramas (Seety)Tennis: All the places in the capital where you can hire a court (Londonist)Tube map by time of travel: Weird applet which distorts the Tube map to show relative time allowances between stations (Tom Carden)Tube Map, Geographically Accurate: One of many versions on the web (MapTube)Tube Official Maps: Including buses, trains, trams, etc. (TfL)Underground London: Secret tunnels, buried rivers and Cold War bunkers (Londonist)V2 rocket impact sites: Hitler's space-bound vengeance weapon devastated London. Some craters are still visible (Londonist)Victorian London: All the key locations important to our 19th Century predecessors (Lee Jackson)