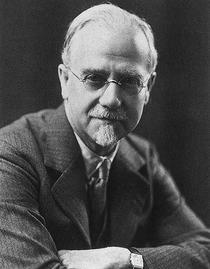 Charles Holden (1875-1960) is a man with two careers. On the one hand, he gave us impressive Portland stone giants like the Senate House and 55 Broadway – two of London’s tallest buildings in their day. But the same chap also masterminded the design of 20 or so tube stations – those elegant brown brick affairs best seen on the northern stretch of the Piccadilly Line. These in particular show off Holden’s principles of ‘total design’. Interiors, light fittings, clocks and tiles – everything in his buildings was crafted to work together harmoniously.

But do his buildings work together harmoniously? We dusted off the old stalking boots and tracked them all down…Two Holborn buildings127-129 Holborn (1904)Law Society, 113 Chancery Lane (1902-4)Holden’s London career opened fairly decently with these strong Edwardian buildings in the near-homonymic area of Holborn. The first pile, on High Holborn itself, is an angular, heavily rusticated branch of the Royal Bank of Scotland. Why not buy yourself a pint across the Road at the Princess Louise and admire the elegant simplicity? The Chancery Lane affair is essentially classical, with a large blocky crown (former kitchens) as if too much self-raising flour had been poured into the cement mixture. The proportions and details hint at what was to come in Bloomsbury and St James.Zimbabwe House, 429 Strand (1907-8)We’ve been here before. Long-time readers will remember the controversial sculptures by Jacob Epstein that adorn this building, most of which have had their features hacked away. Well, their story can be read here. Today we’re concerned with the building. One of Holden’s (and Epstein’s) first big commissions, it’s a reasonably impressive set of offices on the Strand, originally built to house the British Medical Association. The typical Holden mixture of granite and Portland stone creates a building of character and mass, albeit one that most people on the bustling Strand will never notice.55 Broadway (1927-29)The headquarters of the London Underground, and St James Tube station, are perhaps not as impressive as they once were. Surrounded by later less-significant buildings of similar height, 55 Broadway fails to really stand out. Eighty years ago, however, this cruciform building was the tallest office complex in London, and its impact can be gauged from this aerial photo.Holden really didn’t learn his lesson about Epstein and commissioned the maverick sculptor to craft the slightly rude pieces ‘Day and Night’ for his building. The ensuing controversy is well documented.Senate House (1932-37)Whether or not you know the first thing about architectural theory, the great tower at the heart of the University of London smacks you in the face with its ideal proportions and cliff-like solidity. Nineteen floors of Portland stone founded on granite: it’s a true tower of strength. Hitler thought so. Had he conquered England, this was to have been his headquarters. Its qualities of power have also spilled into fiction. This is the Ministry of Truth in Orwell’s 1984; Richard III’s power base in the Ian McKellen reworking; and the short-lived command-centre-cum-sanctuary in Wyndham’s Day of the Triffids. Holden also designed many of the surrounding buildings, though his complete scheme was never realised. Senate House itself was to have been the tallest building in London, but fell foul of financial restrictions.Tube Stations (1925-1935)Holden is perhaps best known for his work on the Underground. As well as the headquarters at 55 Broadway, he also designed many stations on the Northern and Piccadilly lines. Those to the north of town are particularly iconic; brown brick, simple geometry and huge windows give Holden’s stations a charming character. Our montage shows Cockfosters, Oakwood, Southgate, Arnos Grove, Bounds Green and Wood Green. The map at the top of the post shows all the other stations he had a hand in designing (looks like a giant swallow, swooping over London!).How’s our stalking? And who should we stalk next?