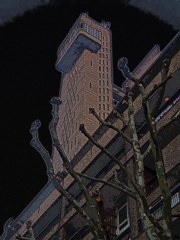 Goldfinger. Bah-Bah BAH! He’s the man…who should have used thicker toilet paperrrrr. So went the iconic sixties Bond theme. (Or was that the man with the golden pun? No matter.)

Goldfinger is that rare example of a man who left his mark on both the silver screen and the west London skyline. For those who are puzzled right now, the famous Bond villain was actually named after a real-life architect, one Ern? Goldfinger. Ian Fleming was so incensed by Goldfinger’s 'ugly' designs that he adopted the name for one of his most famous evil geniuses. We’d take that as quite a compliment. But not old Ern?. This man was no fun and, according to Wikipedia, ‘sometimes sacked his assistants if they were inappropriately jocular’.

That lack of humour comes through in his buildings. Bulky, brutalistic and practically vomiting concrete, most of his London edifices sing from the same grim-sheet. But, like his screen namesake, Goldfinger’s buildings also abound with character. And, like it or not, they’re a very visible part of the London skyline. So hold on to your hats (and that includes you, Oddjob) as we run around town stalking Ern? Goldfinger.

The example par excellence of the architectural style known as brutalism. This familiar slab in west London resembles a pre-stressed, compressed Nessie. Trellick is Goldfinger’s tallest London building, at 31 storeys (120 m including mast). The block contains 217 flats of mostly social housing, but with significant numbers of private residents. Some of these surprisingly spacious apartments will set you back over a third of a million pounds.

The elevator in the service-tower only stops every three floors, because of the way the flats are laid out. So in the service tower, in the spaces where the landings would be where the lift doesn't stop, Goldfinger designed ‘hobby rooms’ — in his naive utopian imagination, this is where the men of Trellick would do woodworking, and the women would do cross-stitch together, as a community. Obviously, this was doomed to fail from the start, and in the ‘dark days’ of Trellick, when it was all crack dealers and rapists, the hobby rooms, which had no toilets or kitchens, became flats for squatters. Classy! Today the rooms are locked. 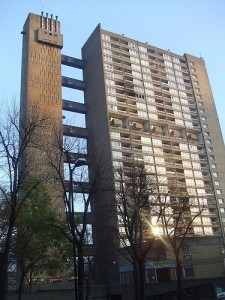 Look familiar? The Balfron Tower was a forerunner of the Trellick. Goldfinger lived here himself for a short while, and would host champagne evenings for the tenants at which he would grill them for ideas and improvements he then incorporated into Trellick. Balfron is a little shorter than its West London cousin at 84 m; both towers are grade II* listed. On the same estate are Carradale and Glenkerry Houses, also designed by our man, and incorporating many of the same features. Particularly Glenkerry, which is 14 storeys high and also sports a concrete 'head' atop the lift shaft. The three buildings form part of the Brownfield Estate, which mostly consists of cooperative housing schemes. (And little shits, on bicycles that are too big for them.)

On the face of it, this residential block is poor. In every way. Then, we scouted round the back to discover just how huge the complex is. And then a funny thing happened. We started to appreciate the proportions, the scale, the fact that this must have been a serious landmark when it was built in the early 1960s. We actually started thinking that this would not be a bad place to live. But maybe that’s because it towers over Elephant and Castle roundabout, and suddenly it all looks very beautiful in comparison. Metro Central Heights (formerly Alexander Fleming House) is further commemorated down adjoining New Kent Road in a colourful mural celebrating the area. 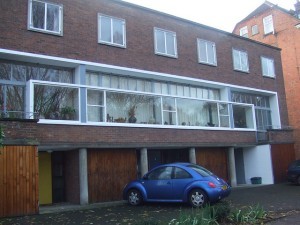 An early Goldfinger design, 2 Willow Road is a small suburban house facing out onto a nondescript patch of Hampstead Heath. The house was designed by Goldfinger for Goldfinger, and he lived here for many years with his family. It’s now a National Trust property, and one of the UK’s most important examples of Modernist architecture. This is the only Goldfinger building open to the public and contains work by Henry Moore, as well as furniture designed by Goldfinger himself .

Goldfinger also designed a number of less memorable buildings in central London. Perhaps the most familiar of these is the French Tourist Office (1956) on Piccadilly (left of image). This hum-drum office block is notable for the ‘F R A N C E’ sign, which is readable from all directions. Otherwise, there’s little to say. Similar work from the same period can be found on nearby Albermarle Street, at numbers 45-46, whose proportions are tastefully in keeping with surrounding Georgian buildings (right of image).

His earliest work in London, predating the Willow Road house, is the 1936 remodelling of 94 Wimpole Street (P&M Abbatt Toy Shop). Goldfinger also designed a range of toys for the proprietors. Finally, there’s the Daily Worker headquarters on Farringdon Road, which was reworked by the architect in 1946.

How's our stalking? And who should we stalk next? Let us know in the comments field.