Digesting 2014: A Year Of Eating And Drinking In London

By Ben O' Norum Last edited 98 months ago
Ben O' Norum Digesting 2014: A Year Of Eating And Drinking In London 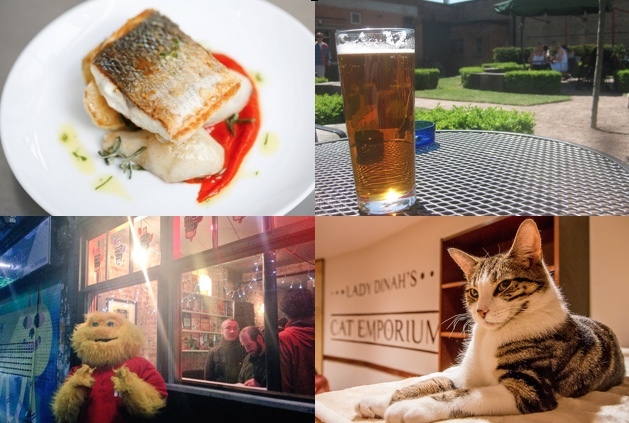 2014 has been an epic year for eating and drinking in London, and quite frankly we’re stuffed.

Let it digest for a while and join us on a tasty trip down memory lane as we recount the capital’s year in food and drink through some of our favourite and most topical food and drink articles, month by month.

January: Eat on the cheap

It’s on the horizon again, and once more it’s going to be a lean month. After the festivities and frivolities of the month(s) before, it’s virtually impossible not to feel poor in January. Last year we did our bit for wallets and the economy by encouraging Londoners not to stay in, and to instead eat out at a selection of top restaurants where a meal — with booze — would come in at £20 or less.
Read more: Don’t Stay In: 10 Great Meals Out For Under £20 Each and Dining In London For Under £20, Part 2
Also this month:
Gringa Dairy: A Mexican Cheesemaker In Peckham
The 10 Best Craft Beer Pubs In London
London Cru: A Visit To London’s First Winery

If February is good for anything, it’s for finding somewhere cosy and sheltering from the weather. We updated our pick of London’s Cosiest Pubs With Open Fires for the occasion, and also selflessly ate our way around town to compile a list of 20 Of London’s Best Sunday Roasts. We’re currently working on a bigger and better updated version with more pubs, and we’ll also be plotting them all on a map — look out for that in the new year.
Read more: 20 Of London’s Best Sunday Roasts
Also this month:
10 Child Friendly Restaurants In London
Brick Lane Curfew Threatens To Close Curry Street
Sustainable Restaurant Awards 2014: How London Did

Londonist paid a visit to London’s two most talked about establishments in yonks (or some time, at least) this month. Not only did we manage to bag a table at red hot Chiltern Firehouse before it became impossible to get in without Kate Moss on your arm, but we also braved hairy trousers and lukewarm tea to pay an early visit to Lady Dinah’s Cat Emporium. Go us.
Read more: New Restaurant Review: Chiltern Firehouse and Londonist Visits Lady Dinah’s Cat Emporium
Also this month:
Cocktales: The Stories Behind London’s Classic Cocktails
A History Of London In Five Beers
Unsolved Mysteries Of The London Lunch

Earlier in the year, we picked out some of London’s Strangest Restaurants — including a Korean where you can get your hair cut, an entirely dark eating experience and, erm, a restaurant full of phalluses. This month we took a look at more strange dining which was on the horizon for London, including cafés where you go to talk about death and a restaurant which only has tables for one — both of these look likely to set up shop in 2015.
Read more: London’s Strange Restaurants: Whatever Next?
Also this month:
London’s Best Ice Cream
Where To Barbecue In London Parks
The Zone 1 Pub Crawl — the best pubs in the whole of zone 1

Late May’s local and European elections saw UKIP do scarily well across the UK. But Londoners largely bucked the trend, showing the anti-EU party much less support than the national average — perhaps because as a city we’re cultural, educated and young. We decided that Londoners who enjoyed showing Nigel Farage a finger in the voting booths might also enjoy showing him a knife and fork when out and about, so we picked the best ways to celebrate the food and drink culture of each of the EU’s member states without setting foot outside the M25.
Read more: Eat The EU In London Part 1 + Part 2
Also this month:
The Home Of Gin At Beefeater Gin Distillery
Where To Eat Flowers In London
London’s Top 10 Highest-Up Restaurants

We recently picked our 10 Hottest Restaurants Of 2014, and The Palomar in Soho was an easy decision for the top spot. It’s a spin-off from Jerusalem’s Machneyuda, which is by far the city’s trendiest spot and probably the best restaurant in the whole country. Thanks to vibrant and inventive dishes, a buzzy atmosphere and free ‘gifts’ from the kitchen, we think that right now the same could be said of The Palomar.
Read more: New Restaurant Review: The Palomar
Also this month:
Two New Restaurants From Gordon Ramsay
Nearest Pick Your Own Farms To London
Eight Of The Best Gay Pubs In London

Proof of London’s booming restaurant scene — as if it was needed — came this month. Not only did the capital play host to the seventh annual National Restaurant Awards, but it also managed to dominate the upper reaches of the list more fully than ever before. Mayfair Indian Gymkhana took the top spot, while Shoreditch’s Clove Club came in at two, Notting Hill’s The Ledbury at three, Jason Atherton’s Pollen Street Social at five, Hedone in Chiswick at seven, Heston Blumenthal’s Dinner at nine and Mayfair’s The Square at 10.
Read more: National Restaurant Awards 2014: London Leads The Way
Also this month:
Where To Drink Spritz In London
London’s Best Foodie Tours
The Best Cocktail Masterclasses In London

What better way to while away some sunny hours than in a pub or beer garden? Our Best Pubs In London site — listing over 300 pubs, arranged by area — came into its own, offering plenty of bank holiday boozing options, and our map of London’s Best Beer Gardens also proved popular. For those wanting something a tad more intellectual, we embarked on a Pub Crawl Around Fictional London, taking in boozers born from the imaginations of writers. As it turns out, many of them are based on actual pubs.
Read more: London’s Best Pubs
Also this month:
Five London Restaurants Launching Shortly… Possibly
Where To Find Grouse In London
Pick Up A Picnic: London’s Best Ready-Made Hampers

It was all about the stars in September, with a new batch of London winners announced. Barrafina, City Social, The Clove Club, Fera, Gymkhana and Kitchen Table all gained their first star, while the capital also scooped nine new Bib Gourmand awards. These don’t carry the accolade of a star, but are given to restaurants offering ‘good food at affordable prices’. High-profile Bib Gourmand winners included Barnyard, The Palomar, Polpetto and Rotorino.
Read more: London’s New Michelin Stars Announced
Also this month:
How London Created The British Supermarket
Where To Make Your Own Alcohol In London
Borough Market Is A Thousand Years Old

In October we saw London triumph big-time at the World’s 50 Best Bars Awards. Not only did Artesian at The Langham hotel just off Regent Street come in first place, but the capital also won the accolade of having the most bars in the list, with eight entries — beating New York’s seven. Other high entries included Nightjar just off Old Street at number three, The American Bar at The Savoy at eight, the Connaught Bar at 11 and Hoxton Square’s Happiness Forgets at 12.
Read more: London Tops The List At World’s 50 Best Bars Awards
Also this month:
London’s Most Haunted Pubs
The Best Food Talks, Classes, Supperclubs And Quizzes In London
Ramen Reviews: Ippudo And Kanada-Ya

It was all about Thai food in November, with the launch of two hot new restaurants to the scene. Smoking Goat took over a former dive bar on Denmark Street, but kept much of the character, serving barbecue dishes while smoking out the room. And in London Fields, northern Thai restaurant Som Saa launched an extended pop-up in Climpson’s Arch — it will now be around until at least spring, which is very good news indeed.
Read more: New Restaurant Review: Smoking Goat and New Restaurant Review: Som Saa
Also this month:
Great Gastropubs: Michelin Lists London’s Best Food Pubs
Deluxe Doners: New Posh Kebab Shop Opens In London
Exhilarating Dishes From New Restaurant The Manor

The Cereal Killer Café opened its doors on Brick Lane early this month, offering over 120 different kinds of cereal, 13 milks and more than 20 additional toppings. It’s decked out like a kid’s bedroom — with cereal box memorabilia aplenty — and had queues out the door when we paid a visit at 7am on its first day. But talk soon turned from product to price when a Channel 4 reporter had a — some might say cheap — pop at the owners for charging over the odds for a bowl of cereal in a “poor” area. They snapped back, cereal puns littered the internet and the comments on our review pretty much encapsulated the different schools of thought along the way.
Read more: What’s The Cereal Killer Café Actually Like
Also this month:
The Greatest Christmas Meal Ever Served
London’s Christmas Cultures — a series uncovering the different ways people celebrate the season
The 10 Hottest London Restaurants In 2014