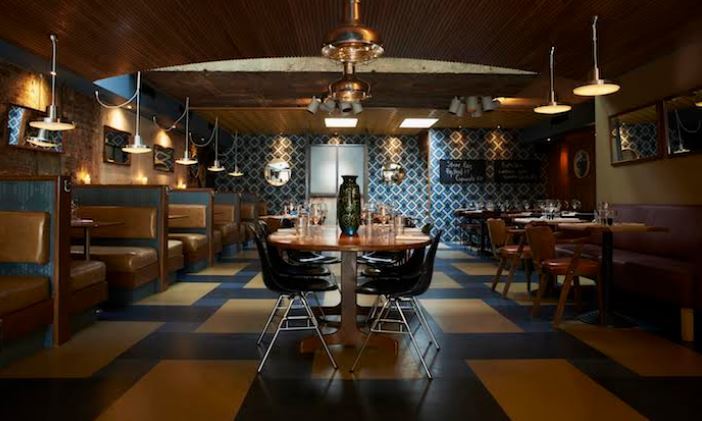 There’s been much hype and hot air about this new Dalston Italian. Partly because of the people behind it. The chef and the face of the project is 29 year old Stevie Parle. His impressive CV includes beginning his career as the youngest chef ever employed by Hammersmith institution River Café, the highly successful Moveable Kitchen supperclub, as well as his pop-up turned permanent restaurant Dock Kitchen, which is still going strong in Ladbroke Grove. Backing the launch is Jonathan Downey, founder of venues including The Player in Soho and Giant Robot in Clerkenwell, as well as one half of Street Feast. And wines are taken care of by Ruth Spivey, who runs Wine Car Boot and Street Vin.

The location of the launch is also getting people excited. It’s mooted as the area’s first chef-led restaurant (we can’t think of another), and according to reports is a sign that Dalston is finally growing up and becoming properly gentrified. Even Stevie Parle himself — also a local — describes setting up a “grown-up, local destination in an area that doesn’t really cater that well for anyone over the age of 25”.

Indeed, the restaurant stands out from the crowd on the Haggerston end of cool-but-shabby Kingsland Road, looking slick and polished in comparison to its neighbours. But with checkered laminate flooring, artex ceilings and walls adorned with garish patterned wallpaper, neither is it too far removed from the tongue-in-cheek retro style which Dalston has long been associated with.

It was packed to the rafters on our recent weekday visit, and an audible convivial buzz radiates from the closely-packed tables as staff hurry around them, struggling to keep up with demand. Far from anything too grown-up, a sense of fun prevails.

Of starters, a generous plateful of coppa ham that’s been locally cured in Highbury is great value at £4 and deliciously salty with it, though it does nothing to suggest us Brits are rivaling the Italians in succulent cured meats just yet. Another dish of pig’s head terrine is 50 pence cheaper and an absolute stand-out: it is deep fried, with a crisp exterior giving way to gooey, melty belly-style meat within, and it is one of the most indulgent nibbles we can imagine. A bottle of wine and a few orders of this and we’d be enjoying la dolce vita.


We continue further along the menu rather than getting waylaid, and in the traditional Italian way a pasta interlude is encouraged before moving onto mains. We try casarecce (narrow rolls of pasta not too far removed from macaroni) with pistachio, basil, garlic and olive oil.  Let’s not pretend it’s anything other than a pesto, but it does gain depth and edginess from the off-the-wall inclusion of pistachios, while remaining fresh and vibrant enough to feel like an interlude rather than a filler. Still, we’d be pushed to call it memorable.

Pork and veal meatballs are a heartier follow-up, with a rich tomato sauce packing plenty of ‘just like mamma used to make’ punch and the balls majoring on juiciness, although a tad more seasoning would have taken them a step further. Another dish of roast chicken stuffed with ricotta boasts moist, deep-flavoured flesh and a herby-fresh ricotta stuffing. Most ingeniously, it has been roasted over toast, making possible the crowning glory that is a moist maker in the form of a slab of soggy bread rich with the bird’s glorious fatty juices.

The taste lingers pleasantly as we enjoy a couple of well-priced Italian reds chalked up on a blackboard under the heading ‘Ruth likes’. And it’s only as we finish on a wonderfully crisp, cream-stuffed cannoli brightly flavoured with fennel seed and orange that we make up our mind what we think of Rotorino. The atmosphere is bustling and buoyant, the wines and small plates great value and a few indulgent flourishes almost genius. We’re just not sure about some of the mains in between. We’ll be back for pig’s head and chianti, maybe some more fritters or cheeses. And we’ll certainly see if anyone is willing to be bribed into serving us the chicken’s roasting toast without the chicken. But if we want pasta or meatballs, we’d rather go somewhere that feels a bit more Italian.