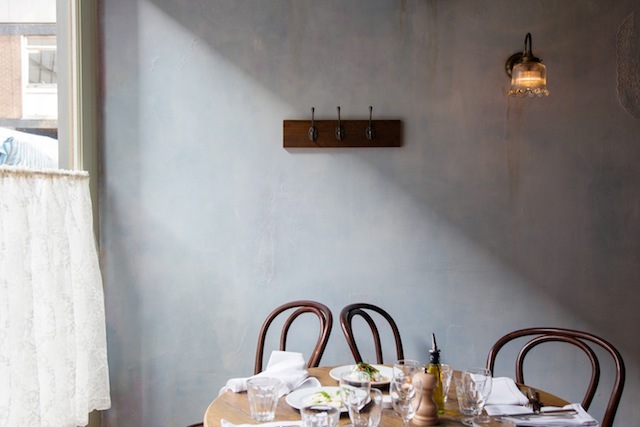 Alright, we’ll admit that the title here is a bit misleading. Polpetto isn’t really new at all. It opened above the French House on Dean Street in late 2010 before closing in May 2012 and re-opening down the road in a bigger premises on Berwick Street last month. In its new guise, it can take double the number of diners, and it becomes the latest in a string of openings from Russell Norman, currently the king of restaurant cool in the capital.

Norman launched the original Polpo on Beak Street back in 2009 to enormous success, and managed along the way to start a trend for small plates, no reservations, and these now-ubiquitous filament light bulbs. Not everyone would agree that all of these are good things, especially if you’ve had to queue outside in the cold for an hour just to get a table somewhere. But the bulbs are certainly pretty cool. And with two more Polpos now pulling in the punters in Covent Garden and Smithfield, another successful pair of West End small plate joints in Spuntino and Mishkins, and a busy pub in the form of The Ape & Bird, there’s no denying that the man done good.

Given Norman has recently taken the role of restaurant start-up expert on BBC2’s The Restaurant Man, advising (and criticising) on design, layout and service in particular, any hiccups in these areas have the potential to be very embarrassing indeed. But it’s not the case.

Surroundings stick very much to Polpo’s hit formula: low-lit, sparsely decorated, and deliberately rough around the edges, yet oh so slickly designed all the same. Antiquated wooden floorboards, gently yellowed walls and focal points in the form of decorative lamps combine to create a hideaway where cosy, cool and comfy merge into one. From arriving (and rather luckily not having to queue at all) right through to paying the bill, we find the staff friendly, efficient and knowledgeable.

Our only gripe is that Polpetto, like Polpo, is styled as a ‘Venetian bacaro’. In full correctness, this label implies a bar serving small bites of food (known as cicchetti, Italy’s equivalent of tapas) to accompany drinks. Polpetto is actually a full-blown restaurant, not a bar at all — but we’ll let it off.

So, it’s just the food left to make its mark. The kitchen is headed up by Florence Knight, widely tipped as a rising chef star of the future. She serves dishes that are firmly designed for sharing. The menu features a few more than 10 small plates averaging around £6-£10, some sides at £3.50-£4, and a handful of desserts at £5-£7. They all change regularly.

Scallops served with a cauliflower purée and strips of indulgent, melting lardo are a hit. The delicate seafood, creamy cauliflower and rich meat work in almost blissful harmony. Still, we can’t help but think that just two (albeit plump) scallops is a bit on the mean side for £12. A large bacon chop represents much better value at £9. It’s lightly hickory smoked, slightly charred on the outside, and beautifully moist within; an accompanying buttery pear and walnut salad sumptuously oozes over it to form a dressing.

Turning attention to vegetables, slow-roasted beetroots are almost syrupy sweet, and perfectly offset by gooey chunks of gorgonzola while given bite by a clever sprinkling of poppy seeds. Cavolo nero with burnt bread sounds much less appealing, but is an equal success. The dark-coloured, strong-flavoured, kale-like cabbage is anointed with a no-holds-barred salty anchovy dressing and topped with crouton-like bites of bread. As with almost all of the dishes here, its strength is its simplicity.

A maple tart is something of a sweet panna cotta in pastry, and signals a stylish end to proceedings. Unless, of course you wish to stay on for a cocktail or three from the Campari-centred cocktail list. A £7 price tag for most of them feels rather reasonable, but they’re not the biggest glassfuls you’ll find. Much like the small plates here, just be aware that the bill could easily fill up more than you do.

Polpetto is at 11 Berwick Street, W1F 0DR. Image courtesy of the restaurant.