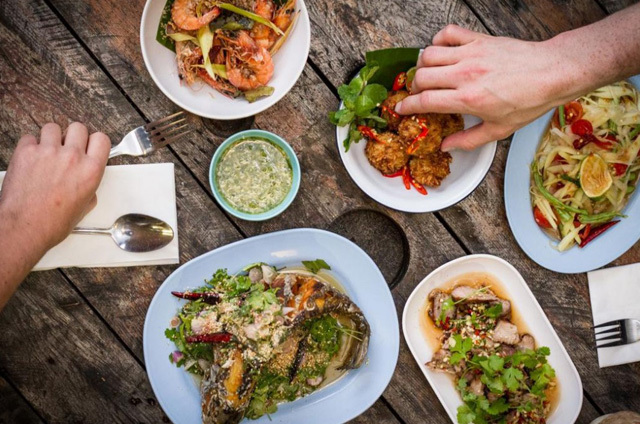 Thai food is having a bit of a moment. In the same week at the end of October that stonking Thai barbecue restaurant Smoking Goat launched on Denmark Street (we reviewed that already), Som Saa arrived in Hackney.

It’s not quite a fully-fledged restaurant, but that takes nothing away from it. In fact, it couldn’t feel more at home in coffee roastery turned pop-up space Climpson’s Arch under London Fields station, where it will reside until early 2015 at least.

In the kitchen is chef Andy Oliver, a MasterChef runner-up back in 2009 and an expert on Thai cooking. Since his TV appearance he’s worked with Thai food legend David Thompson at his now-closed Michelin-starred restaurant Nham in London, as well as at Bo.Lan in Bangkok, which is widely hailed as one of Thailand’s greatest eateries. More recently he’s cooked at The Begging Bowl in Peckham, as well as running regular pop-ups and supperclubs under the Som Saa brand.

Newer to Thai food is Tom George, who has partnered with Oliver and takes care of front-of-house. Given his previous time working at Mayfair’s plush Goodman steakhouse, his ability to work the room with (what looks like) absolute ease is unsurprising, but what a strikingly different room it is.

Rough wood walls and corrugated metal panels are adorned with gauze and dishevelled signs bearing Thai scrawlings, while a concrete floor gives no pretence of comfort. For once, the ubiquitous exposed pipes and ventilation units that give so many restaurants around Soho and Shoreditch the ‘industrial look’ are genuine: this is a working roastery, after all.

We’re not sure if a rural shack of such appearances has ever existed in the Isaan province of northeastern Thailand, from where Oliver’s cooking takes its inspiration, but we have no problem imagining that this is where we are.

We start with a bar snack in the form of bite size pieces of citrus-cured sea bass wrapped in betel leaves along with raw kaffir lime, lemongrass and mint (£5). The sharp, soaring flavours tingle on the tongue like grown-up popping candy, and aptly set the scene for what’s to come.

Big and juicy salt-roasted prawns (£8) are served whole for beheading and undressing at the table, their sweet flavour magnified by an intense saltiness. A spicy coriander-led dipping sauce is also a treat.

An earthy pork belly curry (£12.50) made with pickled ginger and garlic is another triumph. It’s not too dissimilar from a massaman curry — or a vindaloo, even — but with both hot and aromatic spices ramped up a good few notches. The fatty pork belly itself is impressively tender.

We’d recommend a smoked aubergine salad (£7.50) too. Melting strips of the vegetable are accompanied by a gooey-yolked egg, coriander and crustacean-tinted breadcrumbs which the menu calls ‘prawn floss’. Here the combination of sloppy, crunchy and creamy textures are as beguiling as the flavours.

A hot and sour soup containing beef shin, tripe and tongue (£12) is perhaps too authentic. The stock is a rich and aromatic success, but would be so much better if there weren’t quite so many unchewable chunks of lemongrass, galangal and other flavour-givers to wade through.

Some could say the same of the classic green papaya salad — som tam (£8.50). It’s available in either Isaan or Bangkok style, the lesser-seen former boasting a pungent flavour thanks to fermented fish sauce. Complete with large flecks of chilli and sizeable chunks of whole lime, it’s a bold and in-your-face affair which we find endearingly rustic and addictive — but in a masochistic wet eyes and puckered mouth sort of a way.

Pints of locally-brewed Five Point ale (£5) help us battle through, while a sole pudding of nutty, sweet palm sugar ice cream and sesame-fried banana is cleverly designed to soothe a spent palate. The drinks list also includes imported Thai tinnies, a handful each of red and white wines and some Thai-inspired cocktails.

Comparisons with Smoking Goat are inevitable, and indeed it and Som Saa are both excellent, exciting and of-the-moment Thai eateries worthy of much praise. But perhaps a more relevant likeness can be drawn with The Heron, a longstanding and much less trendy restaurant in the basement of a pub just off Edgware Road. It’s widely said to be London’s most authentic Thai experience, and like Som Saa it offers explosive flavours that will wear your palate out but which you’ll never tire of. In fact, consider Som Saa the warm up act…