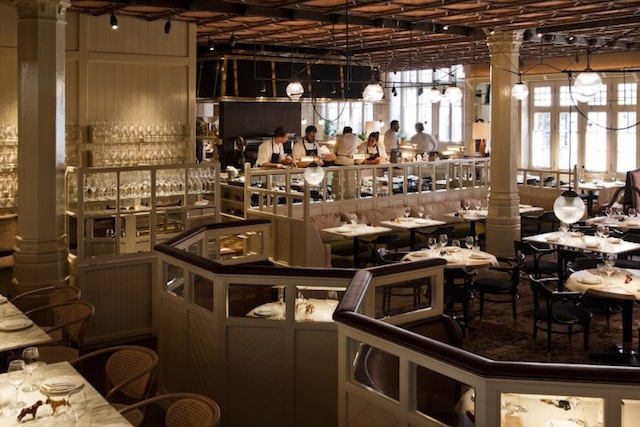 It was only weeks ago that Nuno Mendes announced he was to leave Viajante, his since-closed Michelin-starred restaurant in Bethnal Green’s Town Hall Hotel. He’s already opened his next venture, and by all accounts the appropriately-named Chiltern Firehouse is the hottest place is town right now.


The restaurant is set in a soon-to-open hotel of the same name on Marylebone’s Chiltern Street, in a building that was originally one of the first fire stations in London. It boasts charming red brickwork that promises pure class even from afar. Being greeted by top-hatted doormen and shown through a picturesque courtyard into the restaurant does nothing to suggest otherwise.

To say the bar and dining space is buzzing would be an enormous understatement. It is exactly fitting of a project led by hotelier André Balazs. He’s a big name in the industry with the super-trendy and ultra-swish Chateau Marmont in Hollywood and The Mercer in New York among his portfolio, and he likes a bit of glam. Here tables full of the glitzy and the gorgeous are so pristinely turned out and decadently dressed that you could be forgiven for thinking you’d walked through the wrong door and ended up on a film set. Considering it’s been open less than a fortnight, the fact that Kate Moss, Guy Ritchie, Lily Allen and Bradley Cooper are among a slew of other celebs who’ve already been spotted here only reinforces our point.


The look of the space is unique. A ceiling clad with fabric that would feel at home on the seats of the Bakerloo line, carpeted corridors your gran would like, and a scattering of pot plants and nic-nacs lend a feel that’s simultaneously homely and nothing at all like a home you could imagine. Large supporting pillars, a fireman’s pole, and lights hanging low on their cables inject some industrial cool, while a completely open kitchen adds yet more theatre to an already dramatic display. It’s interesting to note not only the smartly presented kitchen staff, but also an attractive blue-hued charcoal oven and copper-rimmed kitchen fixtures: the attention to detail doesn’t stop at the service line.

Finding the bar area packed with posers and pouters to the point of being intimidating, we retreat to our table for cocktails from a vermouth-focused list. A Kinky Matador particularly stands out: it's a punch-packing take on a Negroni, but made with tequila instead of gin. In a nice touch, the cocktail list comes with recommended snacks, and fluffy doughnuts filled with unctuous white crab meat do a sterling job as warm-up act.


The menu takes influence from Nuno’s years spent working with top chefs in the States, but anyone familiar with his playfully wacky dishes at Viajante will see clear similarities: vegetables are given creative flourishes, wild and foraged herbs get a main billing, cooking steers towards the long and slow or the completely raw, and no plate goes without many an intricate addition.

Of dishes designed to be shared, steak tartare offers the fun of DIY: capers, shallots, radishes, herbs, pine nuts, egg yolk and chopped steak are presented ready to be mixed, with accompanying chipotle sauce to be added as required. It’s fun, flexible and enduringly delicious. Grilled octopus is sexy in its subtle smokiness and meaty in its bite; wild mushrooms add earthiness while squishy aubergine chunks add a texture contrast that seems unlikely to work, but just about does. Sea trout crudo (basically ceviche) comes in a yellow mole (the Mexican sauce, not a weird taxidermy vessel) flecked with coriander and is as bright in colour as it is in its sharp, slightly spicy, pleasurable thwack to the tastebuds.


Of larger plates, a roasted beef rib is soft, tender and butch in flavour; the accompaniments out-do it, though. Creamy hazelnut purée is the meat’s perfect foil, while droplets of melt-in-the-mouth bone marrow are hidden around the plate like diamonds in a luxurious game of hide and seek. A dish of chargrilled Iberico pork with roasted garlic and lemon is bold in its deep pink hue and impressive in its soft-as-butter consistency. Another of monkfish roasted over pine is soft and ephemeral; for fear of sounding as elaborately OTT as the room’s crowd, it has an almost mystical earthy sort of a fragrance about it, off-set by elegantly spiky notes of aniseed. For us it’s a standout.

Of sides, maple-bourbon sweet potatoes deserve mention: silken in taste and texture, they are possibly sweeter than the desserts that follow. Our favourite is a lemon ‘tart’ that comes with soft meringue, zesty granita and a gelatinous lemon parfait; a take on the classic lemon meringue pie.

A glance at the upper realms of the wine list show how much cash is likely to be bandied about here. But don’t let the presence of £800 bottles distract you from those closer to £20. In terms of the food, mains average just higher than the £20, starters half that and puds a little less.

And is it worth? We think so. The hotel will undoubtedly attract a lot of people who value style very highly indeed, but where Nuno’s food is concerned, that style doesn’t come without a whole load of substance. Put another way, there’s no smoke without fire.