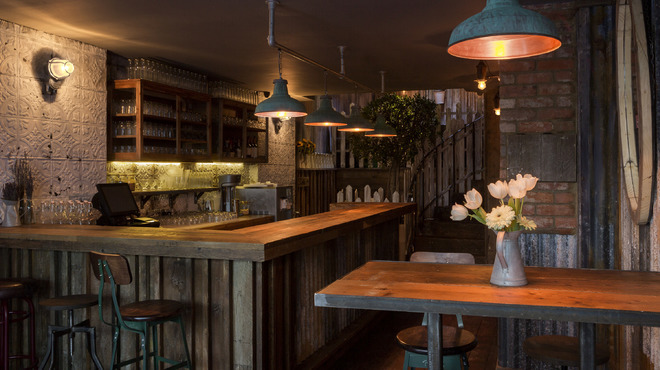 Across London we’re noticing a shift towards more casual styles of dining, with street food, burger joints, gastropubs and pop-ups now as much a part of the must-visit scene as more traditional white tableclothed fine-dining establishments are. For chefs and restaurateurs, the smart money is on diversifying.

Roll on Barnyard, a new chilled-out opening from Ollie Dabbous, the man behind eternally fully-booked Michelin-starred restaurant Dabbous in Fitzrovia. Set just around the corner on Charlotte Street, it’s more casual and much cheaper than his eponymous original, and a lot simpler to get into thanks to a strict no reservations-policy.

That’s not to say it’s easy. We had to wait the best part of 45 minutes for a seat on Saturday afternoon, and have heard rumours of others facing two hour queues. While this adds to the appeal for some, we’re sure plenty others will question the mindset of such a faff in order to get inside what is effectively a rather hip shed clad in knocked-about wood and past-its-best corrugated iron where you get hastily served fast food on the kind of plates you’d take on a picnic. Low hanging lights add that essential touch of industrial-chic that seems requisite for any restaurant-of-the-moment, while a scattering of shrubs and flowers give a nod to the venue’s pan-Atlantic rural leanings: a mismatched blend of dishes led by simple British ingredients, and a homage to America’s bumpkin lands.

Anyone at risk of getting in a tizz with all the queuing should gravitate towards the bar area, which should go someway to righting moods before it’s table time. Here you’ll find a creative selection of shakes and shandies devised by co-owner and man behind the Dabbous bar, Oskar Kinberg. A popcorn-flavoured shake spiked with bourbon is almost dessert-like and bound to divide opinion with its sweet richness, while a Hedgerow Shandy mixes grapefruit, sloe gin, scrumpy and tonic to create a light, fragrant and beautifully balanced drink which we’d head back to the bar for on another occasion if we reckoned we could get in. 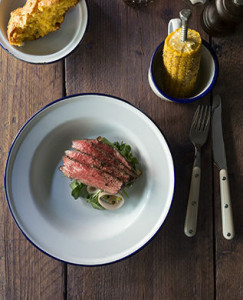 Now time to eat. Barnyard’s menu is short and simple, with mains split between pig, cow, chicken and egg sections. Dishes are generally just a little bigger than you might expect from a starter, priced between £3 and £12 and designed to be shared at the table. A homemade sausage roll served with piccalilli is rich in its porky flavour and satisfying in its meaty bite, if far from ground-breaking. Lard on toast, again from the porcine section, is more special. Yes, it does feel a little like wartime rationing at its finest, but when else do we get a chance to eat warm, fluffy bread thickly spread with just-melting lard?

Another bread-based plate is a highlight for us. Thinly sliced, vibrantly rare roast beef on toast is accompanied by a mini milk bottle filled with warm horseradish buttermilk to pour over like a savoury custard. We’d have liked a little more meat for the £9 price tag, but it’s the first dish we try where we can see direct parallels with the playful but precise clever cooking that’s earned Dabbous it’s Michelin star.

Corn on the cob emolliated with a butter infused with spring-scented meadowsweet keeps the clever tricks coming and is enjoyable enough that we’ll ignore its silly serving in an enamel camping cup. Another veggie-friendly bowl of broken eggs with mushrooms, garlic and parsley is an earthy-flavoured, gooey, buttery delight: a little like an under-set omelette, but in a very good way.

Just as these dishes please by adding unexpected excitement to otherwise run-of-the-mill options, a final flourish in the form of a waffle with chocolate sauce gains a nutty flavour and satisfyingly dense and squidgy texture from the use of acorn flour. Yes, that’s a thing apparently. Unfortunately, it seems the portion sizes, not just the ingredients, are squirrel-minded — but given desserts are just £4 a pop, perhaps it's a reason to get a few to share.

So, is it a barnstormer of a new spot that’s worth the hype? We reckon so, but do have a couple of reservations. Firstly, the lack of, well, reservations. Yes we’ll queue up to try it out, and you should too, but we’re not going to go back regularly and wait that long. Secondly, we found ourselves getting pretty irked by just how conscious the staff were of how very, very cool it is and how keen they were to hurry us along in order to get that queue down. There are some pretty special flavours going on and we’d like to savour them, thank you very much.

Barnyard is at 18 Charlotte Street, W1T 2LY. Images courtesy of the restaurant.