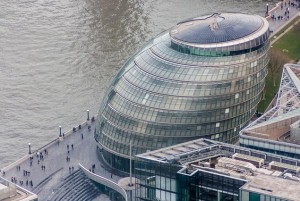 And so back to City Hall, to watch London Assembly Members do battle with the Mayor over who can trade the best insults – no, hang on – shed light on matters of importance to London. We'll start with proposals to close fire stations which, as predicted, Boris Johnson ensured will go to consultation by offially overturning the LFEPA board decision a few hours after MQT. The Mayor called out the Labour, Lib Dem and Green LFEPA members (who voted against), saying

I think it was unwise and was irresponsible seeing as there was no alternative plan put forward... that makes any sense whatever.

You can make up your own mind on whether you think Darren Johnson's alternative plan makes any sense. Boris assures us that the consultation will be genuine and that of course he'll listen to any 'genuine' alternatives put forward during it. And then the real slanging began. Boris used to reserve his particular ire for Val Shawcross but these days he prefers his old House of Commons colleague, Andrew Dismore. As LFEPA member Dismore asked his question, the Mayor cut across, declaring him to be "an invertebrate, a protoplasmic, an amoebic". In this 200th anniversary week of Pride and Prejudice, we're going to turn to Jane Austen for a verdict on this one:

Mr Bennet: "It is happy for you that you possess the talent of flattering with delicacy. May I ask whether these pleasing attentions proceed from the impulse of the moment, or are the result of previous study?''
Mr Collins: "They arise chiefly from what is passing at the time, and though I sometimes amuse myself with suggesting and arranging such little elegant compliments as may be adapted to ordinary occasions, I always wish to give them as unstudied an air as possible."

At least an exchange where Dismore compared Boris Johnson to Wodehouse's Lord Emsworth, Boris responding that at least Emsworth was "a notable breeder of pigs, unlike you" and Dismore describing the Mayor as the Empress of Blandings (that's a pig, to anyone not watching the BBC series) had a note of spontaneity. Yes, this is the level we're at now: we're happy with anything that doesn't look completely rehearsed.

Shall we move onto the (porkless) meat? Part of the fire service plans are to remove 18 engines from service. Navin Shah looked back to November 2010, when 27 engines were withdrawn during the firefighters' strike. Apparently, 20 stations failed to meet their first response target time and another 27 failed to meet second response target times in that period. The Commissioner insists that on a by-borough basis, under the plan target response times will still be met even though actual response times will increase (currently much of London is well under the target). Boris says he prefers to take the advice of fire service professionals rather than those who are, in possibly the most overused phrase of the moment, politically motivated.

What the argument seems to come down to is: London's overall fire provision has, to date, been so good that deaths and numbers of fires are coming down and the time it takes to get to a fire is often well below target (six minutes for first engine, eight minutes for second). Are we happy to lose some of that wiggle room? Answers in the comments, please.

Onto police stations. Joanne McCartney once more asked for a breakdown of how much each of the 65 proposed front counter closures will cost. Nobody seems to know, least of all the Mayor, which makes it hard for anyone to suggest alternatives during the current consultation. Overall, savings from property reforms are expected to be £51m-£55m, but the sums made to get there must have been lost down the back of a filing cabinet.

On changes to Safer Neighbourhood Teams, Boris insists that putting more responsibilities on your local copper won't get in the way of the important job of engagement and intelligence gathering. When Roger Evans asked for assurances that police will be in communities as promised instead of being 'abstracted' (deployed elsewhere), the Mayor said the police will be where they're needed; which maybe wasn't what the AM for Havering and Redbridge was looking for.

Gareth Bacon wanted to know if Boris opposed a bridge at Gallions Reach and was left unsettled by his insistence that he was opposed to the Thames Gateway Bridge – a very different beast. Why, Bacon asks, does TfL keep coming back to the same options instead of getting creative and look at perhaps linking up the North and South Circulars or something else? Boris refused to ever rule out a crossing at Gallions Reach, something that Bacon said would make his constituents very unhappy.

Bexleyites, and other residents of SE London, might be happier to hear that a decision on TfL being able to take over metro routes on Southeastern, as well as Greater Anglia, is coming soon (we believe it'll be April). Caroline Pidgeon got Boris to agree to look at implementing similar levels of staffing and cleaning as the Overground if successful.

Last week's report suggesting terraces would be better than high-rises for London was taken up by Andrew Boff, a veteran campaigner for more and better family housing. Boris agrees in principle about low-rise, but says that each development must be considered on its own merits.

Finally, but by no means least, campaigners to save Lewisham Hospital were disappointed by the Mayor's refusal to join the fight. He says, perhaps not unreasonably, that if he backed one he'd have to back all hospital closure campaigns across London – though not all other hospitals are facing being downgraded to save the ass of a neighbouring health trust. We'll have more on Lewisham later in the morning as Jeremy Hunt is due to announce his decision.

You can watch the full session via archived webcast on the GLA website and find out how to attend a future Mayor's Question Time session.