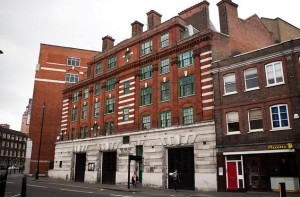 So far this week we've had proposals for police station closures, an A&E closure and now we have fire station closures. Under new plans, 12 of London's fire stations will be closed, 18 fire engines will go out of service and there'll be around 520 fewer firefighters (they plan to do this without compulsory redundancies). The service has to save £45.5m over the next two years.

The list of stations up for closure, fire engine cuts and additions is at the bottom of this post. However, it's worth noting that London Fire Brigade has published a calculation of how the cuts and closures will affect response times. The target is to get the first engine to an emergency within six minutes, the second within eight.

Currently, 26 boroughs meet the first target and 28 meet the second; the changes broadly increase average response times, but are still within the target (with the exception of Hillingdon, which was outside the target before and gets three seconds added). Four of the boroughs that have an average first response time of over six minutes are gaining an engine, which will help a bit. Commissioner Ron Dobson also pointed out that even at the moment, you're not always guaranteed to be attended by appliances from your closest fire station so pinning hopes of rescue on your local station is misguided.

But it's still undeniable that response times will increase, in some cases by half a minute. Labour Assembly Member Navin Shah said

This will reduce fire cover in London, these cuts will put the safety and security of Londoners at risk. It’s time that the Mayor stood up for Londoners and got a better deal from central government. We understand that savings have to be made, but the level of cuts forced on the London Fire Brigade by the Mayor and government are truly reckless. Boris’s cuts are hitting front-line services and putting public safety at risk.

Green Assembly Member Darren Johnson's team has worked out that the Mayor could probably cover the £45.5m if he'd frozen his share of council tax rather than cut it. For an average of 7p a week, would we be willing to pay that for peace of mind, or is rationalisation the way forward? Make your thoughts known during the forthcoming public consultation.

Photo of Westminster fire station by sinister pictures, from the Londonist Flickr pool