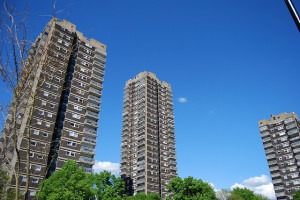 Following on from yesterday's suggestion that empty office blocks be turned into housing, Policy Exchange has come out in favour of no high-rise housing at all.

The conservative think tank believes that streets of terraces and low-rise building could achieve the same population density as tower blocks, citing Kensington and Chelsea as a good example (but let's remember it's not bereft of high-rise: the Trellick Tower and the Grenfell Tower on Lancaster West Estate are also in the borough). The report, Create Streets, assumes that many of the problems associated with the worst towers would be alleviated if people lived closer to the ground, with more private green space.

However, many problems of residents (the report mentions stress, mental health difficulties, neurosis and marriage breakdowns) have deeper roots; namely poverty. We suspect Policy Exchange doesn't have its eye on Strata or the other aspirational new developments springing up all over the place, but council estates. The report acknowledges that many of these buildings were badly built and have been poorly maintained, which doesn't help mental wellbeing.

The Royal Institute of British Architects responded to the report, saying:

It would be simplistic to suggest that all of the social issues mentioned in the Create Streets report have arisen from the design of homes themselves, although there are clearly lessons which can be learnt... Quality design is the most important aspect when it comes to homes of the future, our research has shown that people want space, light and privacy. We believe there are more than just a few types of buildings that can achieve this.

It is true that London has fewer proper family homes than it needs and that even modern developments don't cater for them, preferring to squeeze in lots of one and two bedroom flats. Surely a better mixture of property types would work just as well as recreating Coronation Street?

One building that's about to re-used, not pulled down, is the former police station in Berwick Street. It's been empty for 13 years and will now be developed into 80 homes for key workers. That's probably the fate that lies in store for the police stations currently in line for closure, though let's hope we don't have to wait more than a decade for them to be resurrected.