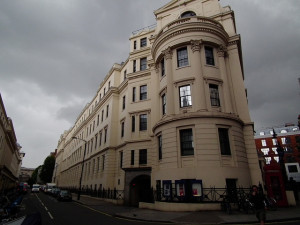 The Mayor's draft Police and Crime Plan has been released, revealing how London will be policed for the next four years. The basic takeaways are: reduce bad things by 20%, increase good things by 20%, get more police onto the streets and sell off underused police stations.

Boris's pledge to keep police numbers at around 32,000 (currently not being met) will be financed by reducing overheads and "releasing assets"; in other words, selling off buildings. We have no objection to the principle of getting rid of police stations that aren't being used or too old to be upgraded, but some of the proposed replacements for front counters are controversial – does anyone really want to discuss their private business in a supermarket? The first pilots, using space in Post Offices (kind of ironic, since many Post Offices are moving into WHSmiths), shops and libraries will be in place this summer.

It's confirmed that New Scotland Yard will be sold. The police HQ will move to the Curtis Green Building off Whitehall, which will be renamed Scotland Yard. Each borough will keep one 24 hour station, and we've pulled together a list of the stations in each borough that are planned for closure at the bottom of this post.

Officers will be assigned away from specialist crime units to Safer Neighbourhood Teams. The plan describes each ward as getting "a named sergeant, and a dedicated base team", which the Evening Standard explains actually means one officer and one PCSO rather than a team of around six per ward at the moment. The rest of the police will be deployed around the borough more flexibly, to more carefully target crime. And Joanne McCartney, the London Assembly Member who heads the Police and Crime Committee, has worked out that some boroughs will actually have fewer police than in 2010.

Burglary, vandalism, theft of and from motor vehicles, violence with injury, robbery and theft from the person are targeted for cuts of 20%. Other types of crime are also singled out, but because of differences in how they're detected they don't fit quite as neatly into the new 20:20:20 slogan. Satisfaction is another target: 62% of Londoners say they have confidence in Met, and there are plans to increase that to 75% by 2016, though we think Boris's hope that the Met becomes the UK's "most loved" force is rather ambitious.

We'd also like to take a moment to highlight how the plan got into the public domain. The Mayor's Office for Policing and Crime (MOPAC) chose to release it to the media this morning, before the London Assembly Members (who are supposed to be the ones scrutinising this stuff) and the public (who start attending consultations this evening) got sight of it. Anyway, it's out now, and you can read the lot on the MOPAC website.

Police stations proposed for closure by borough (some front counters are staying open but having their opening hours cut):

Barking & Dagenham 3 out of 4: Marks Gate, Dagenham, Barking
Barnet 2 out of 4: Whetstone, Barnet
Bexley 1 out of 3: Belvedere
Brent 2 out of 4: Harlesden, Willesden Green
Bromley 2 out of 5:  Biggin Hill Airport, Orpington
Camden 3 out of 5: West Hampstead, Albany Street, Hampstead
Croydon 5 out of 6: Purley, Kenley, Addington, Norbury, South Norwood
Ealing 1 out of 4: Greenford (the front counter at Ealing station will be moved to Perceval House)
Enfield 2 out of 4: Southgate, Winchmore Hill
Greenwich 3 out of 5: Thamesmead, Greenwich, Woolwich
Hackney 1 out of 3: Hackney
Hammersmith & Fulham 1 out of 3: Shepherds Bush
Haringey 1 out of 4: Muswell Hill (the plan controversially changes Tottenham from 24 hour to "daytime" only)
Harrow 2 out of 3: Civic Centre Harrow, Pinner
Havering 4 out of 5: Rainham, Havering, Straight Road, Hornchurch
Hillingdon 1 out of 4: Northwood
Hounslow 2 out of 4: Feltham, Brentford
Islington 0 out of 2
Kensington & Chelsea 1 out of 3: Chelsea
Kingston upon Thames 1 out of 3: Millbank House
Lambeth 3 out of 6: Cavendish Road, Clapham, Gipsy Hill
Lewisham 2 out of 5: Brockley, Sydenham
Merton 2 out of 4: Morden, Tooting
Newham 2 out of 5: North Woolwich, Stratford
Redbridge 2 out of 4: Wanstead, Woodford
Richmond upon Thames 0 out of 3
Southwark 3 out of 6: Camberwell, East Dulwich, Rotherhithe
Sutton 1 out of 3: Crosspoint House
Tower Hamlets 3 out of 6: Bow, Isle of Dogs, Poplar
Waltham Forest 4 out of 5: Waltham House, Walthamstow Town Centre, Walthamstow, Leyton
Wandsworth 2 out of 4: Jubilee House Putney, Battersea
Westminster 3 out of 7: Harrow Road, St John's Wood, Marylebone