What's The Best Pub In Farringdon And Clerkenwell?

By M@ Last edited 120 months ago
M@ What's The Best Pub In Farringdon And Clerkenwell? 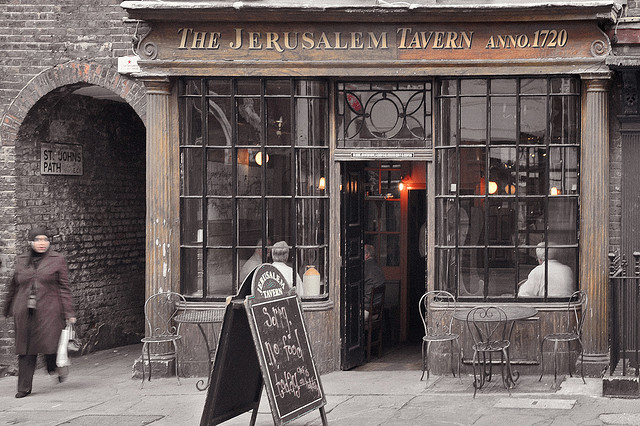 Part ‘F’ of our two-year alphabetical pub crawl around London.

Here are the top 10 pubs in Farringdon and Clerkenwell, as voted for by Londonist readers:

The results are drawn from 455 votes for 48 venues via Twitter, Facebook and our comment thread. See below for how to join our pub crawl round the top four.

The map below shows where the votes went. Green dotted markers show the top 4 pubs, which will form our pub crawl. The rest of the top 10 are shown in yellow, while all other nominations are in red. Note, red markers don't necessarily denote inferior pubs; it might be that the pub is on the periphery of the area, so fewer people thought to vote for it.


View Best pubs in Farringdon and Clerkenwell in a larger map

The winning pub, The Jerusalem Tavern was a clear winner, which will surprise nobody who's been there. The Three Kings gained second place, thanks largely to its famous jukebox, scotch eggs and creative pub sign. Gunmakers and Craft Beer Company are worthy runners-up.

Please join us for a crawl around the top four pubs on Monday 23 July. "Why's it always a Monday?", people often ask. Simple — the pubs are less busy, so we can all get served quicker if there's a large group.

6.30pm The Three Kings
7.30pm Gunmakers
8.30pm Craft Beer Company
9.30pm Jerusalem Tavern (it's tiny, so best to finish there when it's a bit quieter)

To join us, please email matt@londonist.com, just so we can keep an eye on numbers. Everyone who comes along gets a Londonist booze badge, and the first person to find us gets a Londonist t-shirt.

Previously in the A-Z pub crawl

Image of the winning pub by elias(London) in the Londonist Flickr pool.