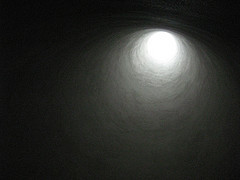 Readers with moleish tendencies will be excited to learn of a festival celebrating subterranean London. The main event and week-long exhibition kick off in the basement of Shoreditch Town Hall on 9 September, where 'many of London's underground secrets' will be recreated by artists. A badly punctuated list of entertainers, from stilt-walkers to Tarot readers, is also promised. Several talks, walks and workshops - including a summary of underground folklore by Londonist's Scott Wood - are also planned. Sadly, actual site visits are at a premium. A tour of the Brunels' Thames Tunnel shaft and the crypt of St Leonard's, Shoreditch are your only opportunities to descend into the Acheronian realm. Still, mustn't grumble. The arty organisers Illumini have put together a smashing programme of talks and you can book in advance by emailing illumini@hotmail.co.uk.

If underground London's your thing, you might want to browse some of our own hypogean adventures.

Inside the River Fleet sewer

Inside the Northern Outfall Sewer

Leicester Square Tube tracks at 2am

The basement of Berry Brothers & Rudd

The bowels of the British Library

And see our map of subterranean London.

Secret Subterranean London, organised by Illumini, runs 10-15 September and is based at Shoreditch Town Hall. The free opening night party takes place on 9 September at 6-10pm. See website for full list of events.