What Goes On Beneath Leicester Square At 2am?

By M@ Last edited 173 months ago
M@ What Goes On Beneath Leicester Square At 2am?

What happens in a Tube station when all the passengers have gone home? Why do Tube workers carry cards about rat urine? And why isn't standing on the right of an escalator necessarily a good thing? Londonist finds answers on our latest nocturnal investigation.

Some of London's busiest Tube stations are in a mess. Missing tiles and chicken-wire cornices are a familiar sight, especially at King's Cross and Leicester Square.

It's a case of short term pain for long term gain, as prominent stations are given a much-needed refit. Workers have just four hours a night to get their equipment installed, fix things up, then reemerge before sunrise. Think about it. All cements, glues and paints must be dry before the public can be let in. Every tile must be firmly affixed to prevent trip hazards next to a platform. And any new electronics must run in parallel with old systems for at least two weeks. If ever there was an apt situation to invoke the cliche 'logistical nightmare', this is it. How do you make these improvements without closing down the station?

From the exposed wiring and unpainted walls, you'd think the renovations involved just a handful of workers. In fact, it requires a small army and military efficiency to refit a station in twelve months, while allowing passenger services to continue during the day.

Londonist was recently invited to witness this beehive of engineering by Tube Lines - the private company in charge of Piccadilly, Northern and Jubilee line infrastructure. They're currently working on 12 stations, but wanted to show us Leicester Square, whose confined West End location makes for a particularly challenging operation. 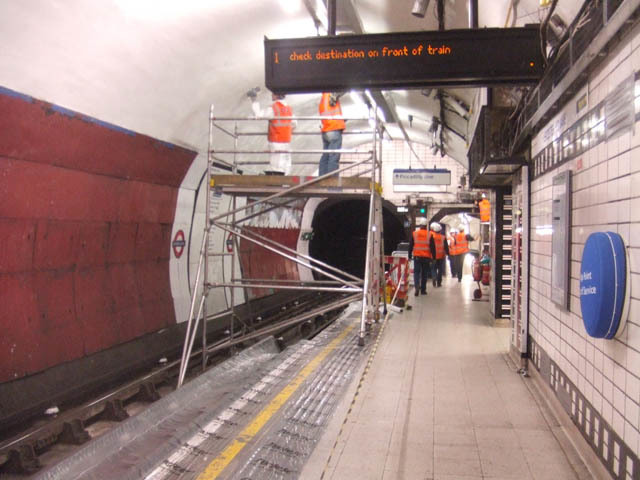 Security is tight. Registers of those entering and leaving are scrupulously maintained. If a worker leaves without checking out, he or she will be phoned at home and ordered back in.

Before I can even get to the register desk I have to pass a one-hour health and safety test, have my passport scanned, acquire an entry card and get suited up in personal protection equipment (PPE) — a sartorial ensemble comprising goggles, steel-capped boots and a high-visibility vest. I'm given information on Weil's disease — a bug that thrives in rat urine — and told of the dangers of trackside needles, discarded by junkies. And I'm not allowed a drop of alcohol within the eight hours before entering the station. Uh, this is going to be tough...

Site Person In Charge (SPIC) Gerry and Tube Lines rep Laura are my guides for the evening. Gerry's been in the business 20 years, and has seen it all. Plenty of one-unders, of course, including a suicide who lost his legs beneath a train, broke his back and skull and got fried on the positive rail. But also outside, where late-night punch ups and drunken accidents are not unusual at Leicester Square.

Around 12.40 Gerry herds 150 workers into the station, which is still partly open to the public. The legion assembles in the ticket hall for a safety briefing. We're given details of first aiders, deadlines, and the nearest hospitals.

The West End interchange is 10 months into its refit to boost safety, security and passenger information. The ticket hall itself is undergoing significant improvements. A newly tiled floor is installed in 10 metre sections each night. New lighting, help points, PA equipment and tactile surfaces for the impaired of vision are also going in.

We head down to the tunnels. Two chaps guard the escalators, stopping the mechanism if anything potentially damaging needs to go up or down. Like a naughty school boy, I take the opportunity to stand on the left for a change. Laura tells me this isn't such a bad idea. Escalators suffer far more wear and tear on the right-hand side, thanks to the polite British tradition of standing to this side.

At the bottom, Gerry points out the dark blue hoardings surrounding a storage area. These have to be individually approved by the London Fire Brigade, and carry a license to the effect.

At these lower levels, chicken wire cages off cabling in the ceiling. Yes, it looks unsightly, but if the workers had to remove and replace panels every night, it would slow down the operation. The chicken wire is not without its problems, however. Syringes are occasionally left in the gaps as a malicious surprise for workers.

We enter a Northern Line platform. The area is almost unrecognisable. In just 20 minutes, the workers have placed plastic sheeting over large sections of track, and erected scaffolding in numerous places. Others are chipping away at tiles or painting over walls. The current is switched off, allowing safe access to the track. Gerry leads us down. Although I know there is no risk of electrocution, I can't help remembering Gerry's story of the 'one-under'. 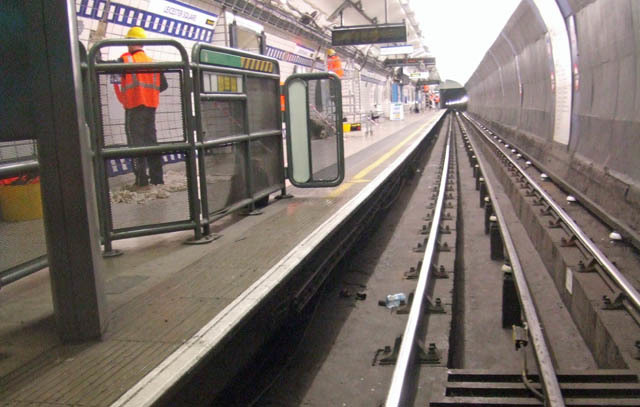 The tunnels make eerie noises at this hour. With no trains running, wind can blow freely along the tracks, creating a sound similar to an approaching train. Not the most comforting of sounds when you're stood part way down the tunnel.

The rest of the tour took us into parts of the station unseen by the general public, such as various control and server rooms, and a giant ventilation tube reaching up to the station roof.

The tour finishes at 2am and we make our way back to the surface. The Oyster barriers are now covered with blue and yellow sheeting to protect against paint damage. No need to 'touch out' tonight, although signing out is essential. 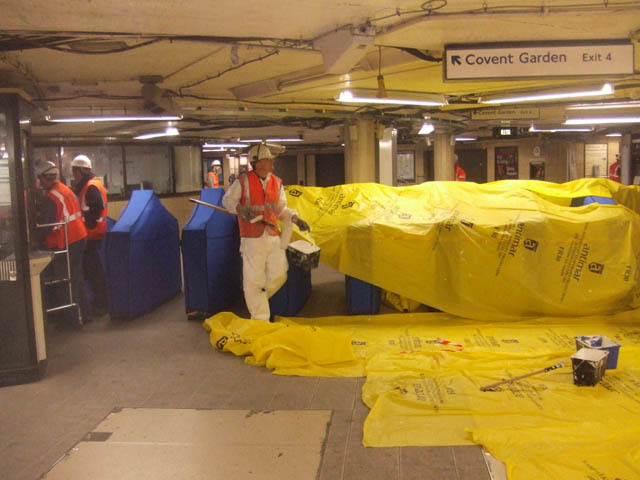 No doubt, I'll continue to moan and be cynical about public transport. It's a popular London passtime, after all. But armed with a new perspective, I will also be sticking up for a workface that, every night, has to face deadlines, dust, and diseased rats. Noise and needles. Electric shocks and street brawls. And navigate a list of acronyms as long as your A.R.M. We'd buy them all a drink, if only they were allowed.

A few other tidbits I learned on the evening:

• Tube Lines attempts to recycle 100% of its building materials.

• A significant number of delays are caused by passengers. For example, litter on the line can block signal triggers.

• Trespass into disused stations is a problem for the operators. This is why TfL very rarely talks about so-called ghost stations such as Aldwych.

• Tube Lines built one of the largest 'green roofs' (a roof planted with grass) in the country for TfL, in North London, but for security reasons its exact location can't be publically disclosed. Time to boot up Google Earth.

With thanks to Laura and Gerry for showing me around, Tube Lines for allowing a blogger into a busy workplace, and Annie Mole for setting this up.