Into the Bowels of the British Library 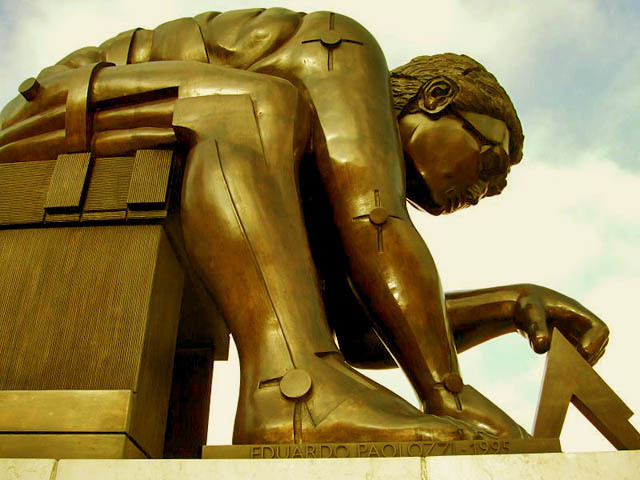 Isaac Newton famously said "If I have seen a little further, it is by standing on the shoulders of giants". Next time you gaze up at his sculpture on the British Library's forecourt, consider that you are doing exactly the same. For most of the library's treasures are beneath your feet in four levels (equivalent to eight storeys) of subterranean basement. Few of the library's half a million annual readers get to see these hidden levels. But Londonist has a history (sometimes a literal track record) of penetrating these hypogeal realms, and the library kindly offered to show us around their ample underparts.

The BL doesn't just collect books, periodicals and audio records; it also gathers superlatives. If every Londoner donated 20 possessions—a shelf's worth of books, say—the pooled resources would still be trumped by the 150 million items in the Library's collection. To house this material takes the equivalent of three and a half times round the M25 in shelving, much of it contained within the biggest public building constructed in the UK last century. These mammoth holdings are viewed by 16,000 people per day—similar to a typical QPR attendance, in quantity if not quality.

Of all the statistics, perhaps the biggest eyebrow-raiser is the Library's age. As London institutions go, the BL is barely zygotic, spun out from the British Museum and many smaller organisations in 1973. In that sense, Geri Halliwell is more venerable than the British Library.

BLHQ opened in 1997 on a stretch of Euston Road that had seen a pre-Victorian burial ground, high-density slums, a Zeppelin bomb and a railway goods station. It is designed to last 300 years. Prince Charles called the building 'an academy for secret police', referring to the somewhat oppressive exterior of the library. But if the building does harbour a covert constabulary, it is more likely to be found in the non-public basement quarters. Which, as we found out, is a not-insignificant portion of the complex.

So what's down there? Well, mostly what you'd expect from the world's second largest bibliocopia (by most measures, only the US Library of Congress can sneer at it). The first thing you notice when exiting one of the key-controlled elevators is the temperature drop. All the storage rooms are kept under controlled environmental conditions. The lion's share of its four double-height basement levels is given to metallic shelving housing books, manuscripts and other forms of information. The most precious items are maintained in special chambers under an inert atmosphere of nitrogen, carbon dioxide and argon, known as Inergen, as extra insurance against fire. Medieval manuscripts and sprinkler systems do not a happy pairing make. 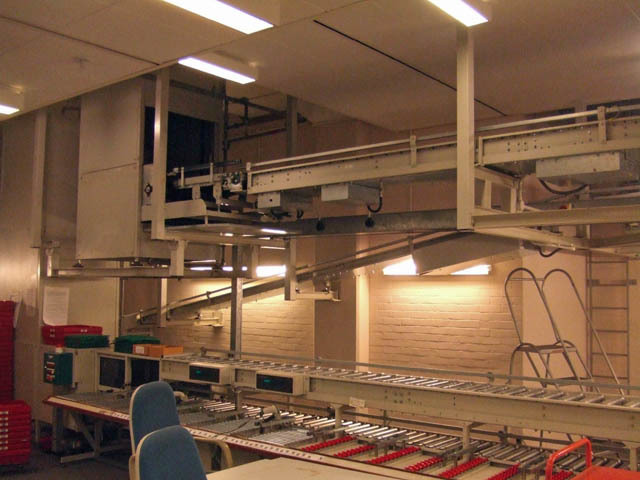 If Henry Ford, Willy Wonka and JK Rowling had ever met for a cheeky half, they might have sketched out something like the library's mechanical pulmonary system. Whenever a reader calls up a book from storage, it is placed in a barcoded crate and whisked off to the eager scholar on a series of conveyor belts and paternosters.

Round the corner an inexplicably caged room contains hundreds of vintage databases, donated to the library in various antiquated formats. Our guide mentions the questionable longevity of digital material. A CD, for example, may only have a life of 20–25 years. The library is busy converting this disparate data into modern formats, which themselves may be redundant in a decade or so.

Our trip concluded with a look at some of the material down here courtesy of Jane Wilson, the project manager coordinating the move of tons of the wordy stuff to a second site in Boston Spa, Yorkshire. Jane produced some samples from the library's stash of Victorian ephemera. The Evanion Collection was bought by the British Museum in 1895 from the eccentric conjurer Henry Evans Evanion. During his lifetime, Evanion amassed over 5000 items of printed ephemera—leaflets and posters touting everything from freak shows to egg powder. 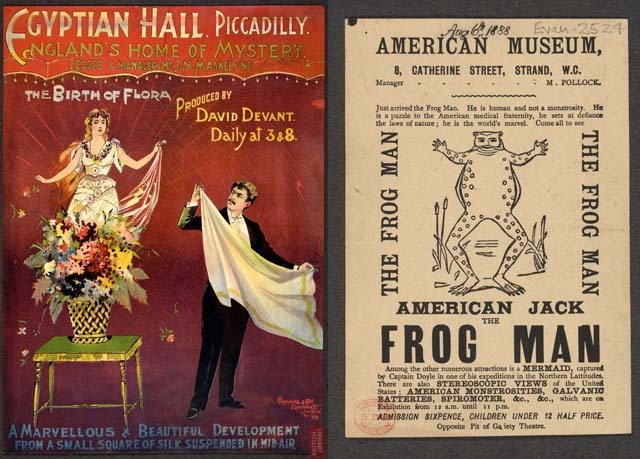 Images courtesy of the BL.

On one flyer a lady is 'born' from a vase of flowers in the Egyptian Hall, Piccadilly. Visitors to Covent Garden may have been interested in the Frog Man, 'He is human and not a monstrosity. He is a puzzle to the American medical fraternity, he sets at defiance the laws of nature; he is the world's marvel.' For a sixpence, you could also view a mermaid and a galvanic battery at the same address. Wonderful, wonderful stuff.

It would take several lifetimes to explore all the treasures deep below the library. To debase another Newton quote for the purposes of an apposite ending, we felt like we were playing on the sea-shore, now and then finding a smoother pebble or a prettier shell than ordinary, whilst the great ocean of truth lay all undiscovered before us. Guess we'll have to get a reader's card.