Films Under The Stars At Rooftop Cinema 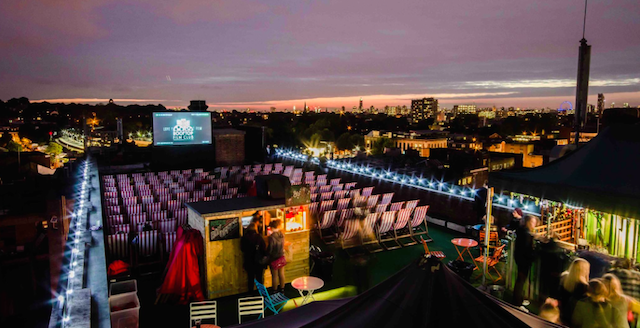 Hot off the (w)heels of Drive-In Cinema and Luna Cinema, Experience Cinema is back for its popular summer event, Rooftop Film Club. Londoners have the chance to watch classic, cult and recent film releases while nestled among the rooftops and chimneys of the capital.

The screenings hop between the Bussey Building in Peckham Rye and Queen of Hoxton in Shoreditch between May and September, with the schedule announced on the website a month in advance.

Films on offer in May include classics such as Top Gun and Dirty Dancing, and newer releases including Philomena and The Lego Movie. Some of the classics will be repeated, but new films will be added throughout the summer too, so if you're split between a cosy rooftop date and a night out with your friends, there's ample time to do both. June dates are now on sale and include Back To The Future, Goonies and Frances Ha.

Seating is first come, first served, so arrive early to bag your choice of the comfy seats. Sound will be relayed through wireless headphones, and stallholders will sell food and drink throughout the film. If it's anything like the food on offer at Drive-In Cinema, it's worth skipping lunch for.

If, like us, your first question was, "What if it rains?" (us, British?), the short answer is that you get wet. Ponchos and blankets are handed out to audience members free of charge on rainy days but it's recommended that you wear warm clothes to cuddle up under the stars. And if you're watching a screening of Noah, just lap it up as additional special effects.

UPDATE: Tickets for all three Rooftop Film Club venues (Shoreditch, Peckham Rye and Stratford) in September are now on sale. These are the last tickets for this year, so they're bound to go quickly.

Rooftop Film Club runs from May to September. Films are shown five days a week. Tickets are £13 and can be bought a month in advance here.