London Food Bank Use Up By 400% In Two Years 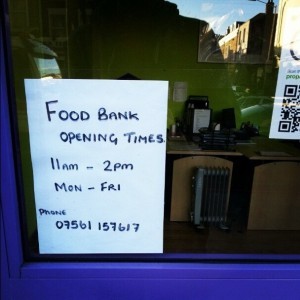 A London Assembly Labour report published today reveals the scale of food bank use in London and calls for free school meals for children in the capital.

In 2011-12 there were 12,839 visits to Trussell Trust food banks in London. This has increased to 63,367 in the first nine months of 2014 — including 24,500 children. The report, Free School Meals - The London Cost of Living, also says that 66% of Londoners support the introduction of free healthy school meals for all primary school children. Labour London AM Fiona Twycross, who wrote the report said:

"We are seeing a growing food poverty crisis in the capital as incomes continue to be squeezed. It is time the Mayor took concerted action to address this problem, it is a scandal that people cannot afford to feed themselves or their families in modern London. The use of food banks continues to increase at an alarming rate thanks to the continued squeeze on living standards."

Food poverty is exacerbated in London, where a high cost of living and spiralling housing costs meet low wages and benefit caps. If anyone needs reminding why 'all the poor people can't just go and live somewhere else', see our article from last year.

As with all forms of benefit, the misconception that just anyone can rock up to a food bank and ask for a free parcel of taxpayer-funded foie gras and artisan bread (Lord Freud in the House of Lords last year, we're looking at you here) prevails. Google 'food bank myths' and you'll get pages of them — including the one that food banks are essentially a self-fulfilling prophecy, they create dependency, people refuse food that needs to be heated up because they're lazy, etc etc. The Guardian reported in January that the Trussell Trust is now distributing 'kettle boxes' and 'cold boxes' — the former containing food which only needs a kettle to prepare and the latter being for those for whom even a kettle is a luxury. The rising cost of energy has joined all the other rising costs and created a situation where people have to choose between eating or heating their homes.

So, given prime minister David Cameron's 'money no object' comment recently in relation to flood relief, what is the government doing about increasing food poverty faced by those at the sharp end of welfare reforms? Well, the DWP decided to remove a box which advised food banks of the reason for a referral, conveniently obscuring any attempt to identify welfare cuts, sanctions or benefit delays as the cause of food bank referral. Meanwhile, DWP secretary Iain Duncan Smith continues to refuse to meet charities over food banks, presumably on the basis that if he ignores it long enough, the problem will go away.

The Trussell Trust says the main three reasons for London’s high usage of food banks are benefit delay (24%), low income (21%) and unemployment (10%), and the cost of school meals is four times greater to parents on minimum wage than to parents on £40,000 per year or more. So it's not that surprising to see more than a third of London food bank clients are children. Incidentally, those stats support the reports of increasing numbers of Londoners living in poverty who are actually in work.

Labour's report proposes the introduction of universal free school meals for all primary school-age children in the capital and a pilot scheme for universal free school meals at a number of secondary schools across London for two years. London mayor Boris Johnson (not for the first time) has gone against the Tories and said he supports universal free school meals. Will this eradicate food bank use? Unlikely. But it's a step in the right direction and would see London's schoolchildren getting at least one square meal a day. It also does a lot more to address food poverty than arbitrary benefit sanctions and avoiding actually paying people a living wage.