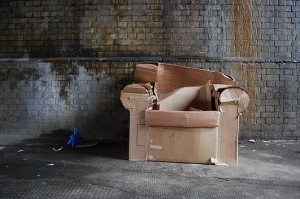 A report released today by the New Policy Institute and Trust for London shows nearly a third of Londoners are living in poverty.

London's Poverty Profile looks at the extent of poverty and inequality in London. And it paints a pretty depressing picture unsurprisingly at odds with the government's claim that if people would only just get a damn job and stop claiming benefits then they wouldn't be poor.

As we've highlighted in some of our previous articles on housing, low pay and poverty, it's not just the unemployed who are bearing the brunt of poverty, increasingly it's those in work too. In September, a report on low pay showed 16% of Londoners earning below the London Living Wage (LLW). London's Poverty Profile says 57% of adults and children in poverty are in working families.

Predictably, the stratospheric rise in property costs appears to have driven those on low incomes out of London, the report reveals that 58% of the 2.1m people in poverty in London live in outer boroughs whereas 10 years ago it was 50%. But when even the outer boroughs become unaffordable (as 13 of the 19 outer boroughs now are), we're not sure where people are expected to move to. The other side effect of London's ludicrously inflated private rental market is that the number of people in poverty has more than doubled to 43% over 10 years.

So why does the coalition keep banging on about work being the magic bullet for poverty? Presumably because it's so much easier to get voters to swallow a myth about feckless workshy benefit claimants. It's also worth pointing out that the report says 190,000 people worked part-time but wanted a full-time job in 2012 (nearly double the level in 2007), showing that even those who want to work more can't do so. Trust for London chief executive Bharat Mehta said:

"Work on its own is not a solution to London's poverty because of the growing number of low-paid jobs. The majority of working-age adults and children in poverty are now in families that work. Londoners are trying hard but are getting stuck; with many being impacted by high housing costs, low pay and limited career progression.

"London's economy may be doing better than the rest of the country but that obscures the fact it has the highest poverty rate."

Photo by Rob Oxley in the Londonist Flickr pool.