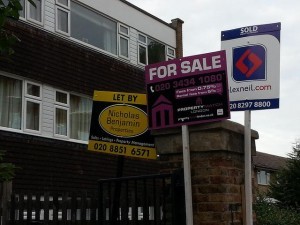 Using figures from the Valuation Office, the median rent for properties on the market in inner London hit £1,500 a month last autumn, and £1,100 in outer London. If you want a 'cheap' (haha) rent, you're looking at an average of £1,150 in inner London and £825 in outer London – which is about the costs we found for the cheapest flats available in some of the cheapest areas in November. Of course, this is over all property sizes and areas, but inner London median rents have increased £200 a month since Q3 2012 (after being steady for a year). Outer London rents have increased £100 a month since the same period, but these have been steadily creeping up.

The most expensive borough to rent in? No prizes for guessing Kensington and Chelsea. The cheapest is Bexley, with a median rent of £850 a month.

However, there may be some light on the horizon. Office for National Statistics data shows that rise in rents appears to be slowing. Throughout 2012 and to June 2013, the change in rents from the same time the previous year was over 2%; since July, that figure has been coming down and in December was 1.6%. That's still twice as fast as the rest of the country once we're taken out of the equation, but it's something to cling on to.