Barclays Sponsorship Of Cycle Hire To End In 2015 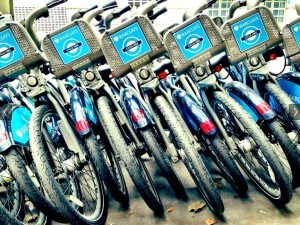 Barclays has announced that it will not renew its sponsorship of the cycle hire scheme after 2015.

The bank paid £25m towards the scheme in return for the bikes' turquoise livery, but in 2011, London mayor Boris Johnson announced Barclays would pay a further £25m for sponsorship until 2018.

Despite its visibility and being credited with boosting London's 'cycling revolution', the scheme has been beset with problems — the cost to boroughs of expansion, the ongoing uncertainty over whether it would ever break even, a price hike, and most recently a fall in usage. Even Barclays' involvement in the Libor-rigging scandal had people questioning whether it was a suitable sponsor. The withdrawal of the bank also highlights the risk of relying on a sole sponsor for a scheme which is considered part of London's transport infrastructure.

Questions have also been raised over what appeared to be a rather one-sided deal between Barclays and TfL — the mayor had previously said there would be no cost to the taxpayer for the cycle hire scheme but TfL figures show sponsorship and usage charges only covered half the amount needed to run it. Conservative AM Richard Tracey praised Barclays' involvement, saying:

“Barclays have been a very good sponsor of a fantastic cycle hire scheme, the deal has shown that sponsorship of public transport schemes work, and it is unfortunate that they have faced – and continue to face – such brickbats for their role in helping provide a cycling revolution to Londoners. Nevertheless the chance to work with a new sponsor is a great opportunity to expand this popular scheme even further to other parts of London. Cracking sponsorship is the key to bringing private sector funding into London's public transport. TfL must seize that chance.”

"Back in 2011 the Mayor and TfL announced this sponsorship would be extended to 2018, yet now we learn it will end in 2015. Boris failed to get a good deal in the first place and the contract was awarded in a totally un-transparent way. The scheme has not been as successful as hoped with the number of hires dropping considerably. Figures from TfL show that 726,893 journeys were made in November 2012 - but only 514,146 the same month this year, a drop of 30%."

TfL, in the time-honoured manner of the dumpee, are presenting the sponsorship's demise as a mutual decision, saying:

"Barclays remains committed to the sponsorship agreement signed in 2010, but the bank and TfL have decided not to take up the option to extend it."

So now the way will be open for new sponsors, who will step into the breach with their chequebook and pen? We assume banks, oil companies and Addison Lee are out of the running while Emirates are stuck with the cable car for another eight years. Answers on a postcard.

Photo by Rob Emes in the Londonist Flickr pool.