Cycle Hire Use Is Falling 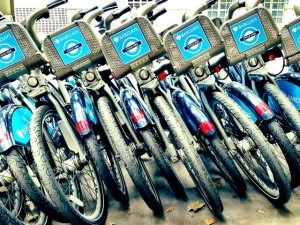 Fewer of us are using the Cycle Hire, with large ridership drops in October and November when compared with the same months last year.

Mayorwatch reminds us that boroughs had to pay up to £2m for the latest extension and that Transport for London doesn't know if the cycle hire will ever break even. Barclays's sponsorship is performance-related, and the bank has already docked £1.5m of its payments. Boriswatch has calculated the public subsidy per cycle hire journey as £1.20, a sum that compares poorly with 17p subsidy per bus journey.

There was a similar spate of stories earlier in the year when figures for May showed a 20% year-on-year fall. It was impossible to compare usage over the summer because of the Olympics effect during 2012, and unfair to compare March 2012 with March 2013 which was bloody freezing. (There were around 9,000 more journeys made in April 2013 than April 2012, and this July actually compares quite favourably with Olympics July, but we did have a lovely summer.) The scheme was also extended eastwards in March 2012, so comparisons before then aren't accurate, and is due to be extended westwards from next week.

So what's causing the drop-off? Price rises at the start of the year won't have helped, and we still hear anecdotes of technical problems and full or empty docking stations. Andrew Gilligan, the Mayor's cycling commissioner, is worried that cycling safety campaigners are scaring people off their bikes. Or has the novelty simply worn off?

Photo by Rob Emes from the Londonist Flickr pool.