Boris Asks Barclays For Another £25m 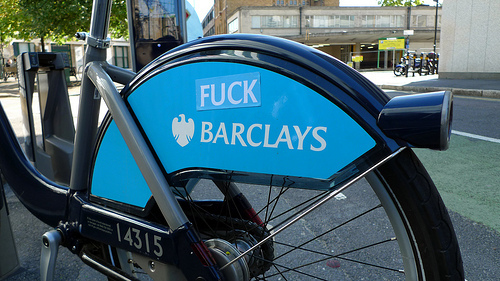 Boris Johnson has put Barclays on the spot over sponsorship of London cycling initiatives and says they should pay another £25m.

Lest we forget (and how could we with that turquoise logo all over the city), the bank forked out £25m last year to back the cycle hire scheme as well as the cycle superhighways which despite some initial gremlins have been enormously successful as well as netting Barclays lots of lovely brand exposure.

The mayor said in an interview with BBC1’s The Politics Show London that he had already approached Barclays to ask for the extra funding though the bank are non-committal on the subject. It’s a shrewd and timely move on the part of Boris – only last week the bank was widely reported to have paid just £113m in corporation tax against £11.6bn profits – but whether or not they will see this as good enough reason to ‘cough up’ another £25m remains to be seen.

Boris Johnson has long had a turbulent relationship with the banking industry. In the past he’s been outspoken in his opposition to bonus tax at the same time as publicly urging banks and their employees to sponsor charitable causes though his assertion in the Politics Show interview that Barclays should pay out the extra £25m in return for taxpayers’ money being used to keep the industry afloat is somewhat hackneyed.

Should Barclays agree to pay up, we can’t wait to see what inventive marketing plans will emerge for London’s cyclists – turquoise branded helmets and cyclewear perhaps?