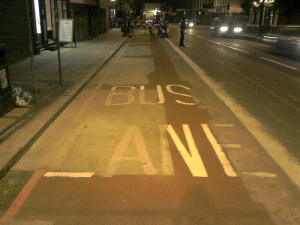 Minicab boss John Griffin made headlines this week after instructing Addison Lee’s 3,500 taxi drivers to use bus lanes in London.

Bus lanes are currently off-limits to all vehicles except black cabs, buses, cyclists and (as of January this year) motorcyclists but Addison Lee has secured a judicial review of bus lane legislation, due to be heard later this year. In the meantime, Mr Griffin believes that minicab drivers should be allowed to use the lanes and has said that he will pay any fines incurred by his drivers:

“The current bus lane legislation is anti-competitive and unfairly discriminates against the millions of passengers that use Addison Lee. Minicabs perform the same function as Black Taxis and are licensed by the same authority, so there is no reason that they should be penalised due to outdated legislation.”

TfL have struck back with the threat of prosecution for the drivers and potential loss of their Private Hire Vehicles (PHV) licences. Leon Daniels, Managing Director of Surface Transport, said:

"The letter from the management of Addison Lee is utterly irresponsible. By issuing it, Addison Lee risk regulatory action against themselves and leave their staff liable to criminal prosecution. We have asked Addison Lee to withdraw their letter immediately. We are also writing to all Addison Lee drivers reminding them that repeated breaches of traffic regulations could see their licence to operate withdrawn."

Ouch. It's not the first time that the minicab company have gone head-to-head over road restrictions — they emerged victorious from a previous skirmish over the now-defunct M4 bus lane when the Crown Prosecution Service dropped more than 200 tickets and 130 court summonses after deciding that the case wasn't in the public interest.

TfL says that if "tens of thousands of Private Hire Vehicles to drive in bus lanes would seriously disrupt the bus network and our passengers' ability to get around the capital" and a cursory glance at the figures suggests that PHVs outnumber black cabs by about 3:1. But how much would they really disrupt bus travel? The fact that minicabs can't be hailed on the street means that they tend to be booked for longer runs out of town rather than spur-of-the-moment short-distance scoots. But equally it could be argued that bus travel is so painfully slow anyway that anything that has the potential to make it even slower should be deterred.

Boris Johnson could also find himself in a bit of a quandary — as the Guardian points out, the Tory party accepted £250,000 from Addison Lee, £25,000 of which went to the mayor as a campaign donation which helped him win City Hall, and chairmanship of TfL, in 2008. With the run-up to the mayoral elections apparently having turned into open warfare between Boris and Ken Livingstone, it's probably an embarrassment that he could do without. Unsurprisingly, the mayor has declined to comment on the taxi war.

Griffin has also incurred the wrath of cyclists and Green party mayoral candidate Jenny Jones over his suggestion that cyclists should have to undergo training before being allowed to use the roads, with Jones issuing a press release calling for a boycott of Addison Lee. The inevitable Facebook protest is also underway with a 'die-in' planned for Monday 23 April at 6pm outside the company's HQ.

Will John Griffin and Addison Lee win a second battle over bus lanes? Find out after the judicial review later this year.

If there are any Londonist-reading cabbies out there, of the PHV or black taxi variety, let us know your thoughts in the comments.

Photo by Bob Comics in the Londonist Flickr pool