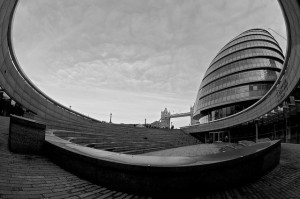 We watch Mayor's Question Time a lot, and it depresses us. Then we summarise it on this corner of the internet and, frankly, sometimes it's so ridiculous that we wonder if you believe us. Friday's session – a very serious meeting, to discuss how London's public money gets allocated – was one of the worst we've seen for time wasting, question avoidance and insults. Bugger all information came out of it so instead we thought we'd quote some of the choicest exchanges and give you an insight into what our democracy looks like.

During what we're going to call a 'robust discussion' of changes to how London is policed, the debate moved from the opposition parties to the Conservative side of the Chamber, and the Mayor... Well, the Mayor seemed to lose interest.
Roger Evans: Listening to members of the Labour group this morning, they seem to have no more suggestions about reforming and improving the police service than they had last time round. What they seem to be suggesting is that we raid other areas of funding to continue to support the situation as it is now, and kick the can down the road for another couple of years. Mr Mayor, is this a sustainable way to approach the provision of emergency services in our capital?
[Somebody off mic]: He's not listening to you, Roger.
Darren Johnson, chairing: Mr Mayor, are you listening?
Roger: I think I'm making my point anyway.
Boris: Right! I'm listening with my usual rapt attention to everything that takes place in this...
Darren: What did he ask you then?
Boris:  He asked me quite why it was, and how it was, that in this city, after all the maladministration of the previous Labour mayor, we have managed to get so many more police out there on the street.
Roger: Yes, I think that's pretty much what I was saying.

Another example of the Mayor being, we can only assume, bored and not listening came when Andrew Dismore asked about fire cuts and reductions to the number of firefighters in London, with some clearly pre-prepared epithets.
Andrew: You've previously said that firefighters put out fires, so why do you want to get rid of 520 of them? What you're doing is turning Fireman Sam into Dole Queue Sam, Striver Sam into Shirker Sam – on your Prime Minister's definition – why are you
Boris: Into what? Are you accusing firefighters of being shirkers?
[There followed an exchange almost impossible to hear as the Mayor shouted something about shirkers over the rest of Andrew Dismore's question]
Andrew: You should not be cutting the council tax, you should be looking after the interests of Londoners.
Boris: Can I give you a bit of political advice, Andrew? Don't say firefighters are shirkers, that's what you just said!
[More shouting over each other]
Boris: I really think you need to be careful with your language, people will take great offence at what you're saying about hard working people.
Andrew: You are going to put people out of work.
[More talking over one another. Londonist gets fed up.]

Following an entirely reasonable question from Gareth Bacon suggesting greater cuts in the Assembly's budget, an oft-aired Conservative complaint came up from Kit Malthouse:
Kit: They [Labour] did a deal with the Greens to keep their budget up so they'd join the [left opposition] coalition.
Boris: Is that right?
Darren: For the record...
Boris: It's a grubby deal?
Kit: I think there's a letter.
Boris: Is there a letter? You're joking! [Londonist: yes, the letter's here (PDF). And has been public since May 2012.]
Darren: For the record, that was a decision taken in a public meeting.
Boris: So they bunged the Greens to keep them in the coalition with taxpayers' money. Are you serious?
Darren: For the record this was a public decision taken in the Oversight committee by a majority vote...
Boris: Taxpayers' money.
Darren: ...complaints have been made to the monitoring officer and were investigated...
Boris: Complaints have been made?
Darren: ...and no complaints upheld.
Andrew Boff: At a time when all public services are being asked to make cuts to get us out of the hole left by the last government, do you think it's wise to use public funds to cobble together political alliances to exclude representatives of 32% of the electorate at the last election from taking a full role in this Assembly?
Boris: Are you talking about the deal that I've just been alerted to?
We're going to leave this one here, as this pantomime has taken place almost word for word at least three times in City Hall since May 2012. You can read more about the background and precedent on Mayorwatch. Just so you know, this grievance-airing discussion took up about eight minutes of budget scrutiny time, which could have been spent debating Gareth Bacon's ideas for saving money, or something else more practical.

Here's a lengthy exchange that sums up the very worst of the these meetings. On an issue of importance to Londoners – fares – Val Shawcross attempted to find out the Mayor's rationale for increasing fares and instead got cranky stonewalling. Boris clearly dislikes Val and seems to hold her exclusively responsible for any pre-2008 transport decision he doesn't like, and tends to respond to anything she says with personal attacks.
Val: Can I just characterise what you're doing with the budget? You're cutting the precept for households by 7p a week, and raiding Londoners' pockets by £34m a year by putting the fares up 1% above RPI. I was very interested in your allegation that there is in fact no surplus at TfL. There have been unbudgeted operational surpluses for the previous four years and if I can just give you a little bit of information to help this debate along
Boris: We had an election campaign about this, you lost the argument, I won.
Val: At the end of the year, TfL forecast an overall underspend of £468m in 2012/13 –
Boris [groaning]: No, that is wrong...
Val: Sorry Mr Mayor, this is a document the Assembly has, this is the Mayor's Background Statement in support of his draft consolidated budget for 2013/14. It's quite a long document Mr Mayor, I quite appreciate you might not have read it to the end.
Boris: Yeah yeah yeah.
Val: £468m –
Boris: You produce all sorts of bits of paper which you claim support your case.
Darren: Stop mumbling everyone, stop interrupting.
Val: I'm quoting back your statement, in writing, to this Assembly, it has legal force. Why do you feel it's so unreasonable to keep the fares low, keep them at RPI –
Boris: RPI? That's a change! You wanted to cut them, you wanted to cut them by 7%, now you want to go up by RPI! U-turn!
Val: – raiding the pockets of Londoners. Why is it so unreasonable, Mr Mayor?
Boris: U-turn! U-turn by Labour! Before the election you wanted to cut fares by 7%, now you want RPI, is that right?
Val: You're putting up fares by above inflation –
Boris: Do you want to cut fares by 7% or not?
Val: – you could at least keep it at inflation.
Boris: OK, major U-turn. Major U-turn by Labour. Common sense has returned.
Val: Can you answer my question Mr Mayor? Why don't you just give some money back to passengers?
Boris: Some element of common sense. I note that you have abandoned your ludicrous position of last year that it would be possible to cut fares by 7%.
Darren: Would you like to also answer the question?
Boris: This is entirely relevant, because their whole argument was that there were such huge sums of money sloshing around that you could cut fares by 7%. Do you remember that?
Val: Mr Mayor, can we move on since you're not going to answer that question?
Boris: All the cash that you're talking about is allocated against vital programmes –
Val: This figure is twice what was anticipated and a good half of it is revenue, so that's more cash in your budgets. You're clearly not on top of the TfL budget figures
Boris: I'm sorry you're not on top of the figures Val.
Val: Is TfL well controlled and internally directed by yourself?
Boris: Yes. Don't forget what I said earlier about the £3.5bn we've already taken out of TfL's budget, the 25% reduction in the number of directors, the disposal or sale of 40 buildings. [Shouting] What did you do when you were in charge? You had a role in TfL! What cuts did you make? Absolutely nothing! You whacked fares up, I've cut TfL radically.
[More talking/shouting at the same time]
Val: Was it your idea that consultants employed by TfL should go up by 77%?
Boris: Oh, come on. Don't be ridiculous.
Val: Is that your policy?
Boris: Don't be ridiculous. We are engaged in the biggest engineering project in the whole of Europe in Crossrail, we have a massive increase in our capital expenditure, of course we employ consultants. [Continues to mutter something about 'utterly ludicrous']
Val: These are TfL employees, they're not Crossrail employees. Did you agree that it was OK for there to be 433 TfL staff earning over £100k a year?
Boris: I think it is utterly ludicrous of Val Shawcross to be criticising any aspect of TfL's spending when as far as I can remember you had some role in TfL spending.
Val: I'm asking you a question, Mr Mayor. Do you think it's reasonable?
Boris: Yes, I do! We are engaged in a massive programme of our transport infrastructure system –
Darren:  Let's stop talking over each other.
[They continue to talk over each other]
Darren: Let's have Val Shawcross's question and let's listen to it quietly.
Boris [mumbling]: Then say something sensible.

If you want to watch the full panoply of smirking, diversionary tactics and childishness, you can watch the archived webcast on the GLA website  – you need London Assembly (Plenary) part 1. Should you have masochistic tendencies, you can also go along and watch the next session in person.