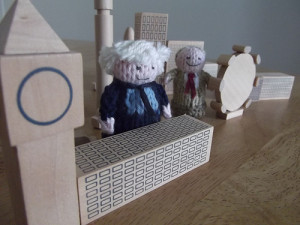 What's more important to London's transport users — keeping fares low or investing in infrastructure for the future? The answer is obviously both, but like all good cake, we can't have it and eat it. Boris Johnson and Ken Livingstone have both pledged to improve the city's transport but in opposing ways.

Ken Livingstone's promise to cut fares by 7% if he's re-elected and resign if he doesn't might have helped the former mayor gain in the polls against Johnson. And not content with that, Ken has also pledged to make the Barclays Cycle Hire scheme free for older people. The mayor's announcement that fares would increase at the start of this year probably haven't done him a lot of favours in the popularity stakes, but Boris is insistent that higher fares are necessary to invest in the system and has committed to increasing them by 2% above inflation every year to fund that investment.

So where does Ken plan to find the money to cut fares in such a dramatic fashion? We've all heard his claim that TfL has a £729m surplus in its operating budget, a claim which TfL staunchly refute. TfL’s chief finance officer Stephen Critchley told C4's FactCheck blog:

The reason for the big difference was that TfL had to change its plans to cope with the grant reduction of £108m and prepare for the impact of the October 2010 Spending Review, which reduced the grant by £2.2bn over 4 years. This underspend – which did result from higher operating income and lower operating expenditure than budgeted – was used to offset the loss of £2.2bn funding in an effort to balance the business plan."

But 7% off our fares — that would be pretty helpful at a time when everything else is so expensive, right? But what could it actually mean for London? According to Boris Johnson's answers from Mayor's Question Time last December, a cut of 5% would mean:

...to meet the scale of the financial reduction outlined above, the following key projects which are not yet contractually committed would need to be looked at first to be cut:

The following projects already underway would also need to be looked at:

It should also be noted that all the projects above (except Cycle Superhighways) have explicit agreed milestones in the Secretary of State’s Spending Review letter. Any change away from the milestones may result in a reduction in Government Grant, meaning further savings would be needed to fill the financial gap.

Professor Tony Travers of the London School of Economics (LSE) also spelled out the impact on loss of revenue caused by fare cuts both to FactCheck and in the Evening Standard, stating that "every pound taken off fares is a pound not available for investment".

The Green Party thinks we can have both investment and low fares though. In Mayor's Question Time in January, Darren Johnson said:

"On this issue of fares we have had a fairly sterile debate over the past few months basically being about a choice between increasing fares or reducing fares and increasing investment or reducing investment. Would you accept that there is another way forward and that we could maintain investment in new public transport infrastructure and reduce fares if we were to look at a more sophisticated form of road pricing which academics have suggested could raise £1bn a year which could provide investment for new public transport and provide a significant reduction in fares to make life easier for Londoners?"

The road pricing in question, which Londonist will look at later this week, is the subject of a report commissioned by Darren Johnson which suggests that around £1.4bn could be raised from road pricing. Meanwhile, Brian Paddick also outlined his fares policy recently, which again concentrated on reducing fares.

Like Boris, Ken is also no stranger to increasing tube fares, even after making pre-election promises to hold them down which later turned out to be misleading. So while a short-term cut at the ticket gates would be good for our wallets, it may turn out to be something of a pyrrhic victory for the former mayor should he be successful in his re-election bid.

The long and short of it is that having low fares at the same time as maintaining and upgrading infrastructure seems pretty much impossible, especially if the transport system in question is 'creaking and suffering from decades of under-investment' (we note that Boris has picked up on Bob Crow's favourite adjective for the tube). As an aside to this, Richard Trench and Ellis Hillman's London Under London notes that in the 1970s, the Paris Métro received three times as much investment as the London Underground.

Photo by Matt from London