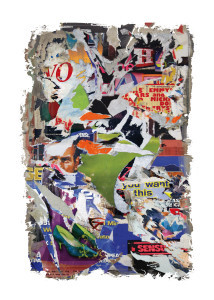 Continuing our series of original art and photographs inspired by subterranean London.

Palimpsest is an over-used word, mostly employed by people who want to show off. But the poster boards on the London Underground really are modern palimpsests, with old adverts scraped off to make room for the latest advert. Sometimes, the removal is incomplete and a hotchpotch of styles, colours and messages ensues.

David Shand has drawn inspiration from these marketing hangovers, to create colourful prints:

I’ve  been interested in the imagery of faded, ripped posters on the Underground since I came to London in the early 1990s.

A few years ago I started making screen prints based on photographs of these images. Mostly I really like the images formed, but I also find something very satisfying about how posters and advertising decay and gain new meaning.

I finalise the design in Photoshop and then expose the artwork on to an emulsion screen and print one colour at a time in CMYK, pulling ink through the screen with a squeegee.


Some of his prints are available online via Print Club.

We’re still looking for further entries for the Londonist Underground series. In particular, we’d love to see a few more drawings and paintings, having received plenty of photos. Also, remember that subterranean subjects other than the Tube are eligible — buried rivers, secret bunkers, dragons’ lairs…so long as it’s underneath London in fact or fantasy. PLUS: it looks like we’re now going to be staging a real-world exhibition of the best images in February (details to follow). You’ll need to submit your entry in the next few days (email matt@londonist.com) to be in with a chance.