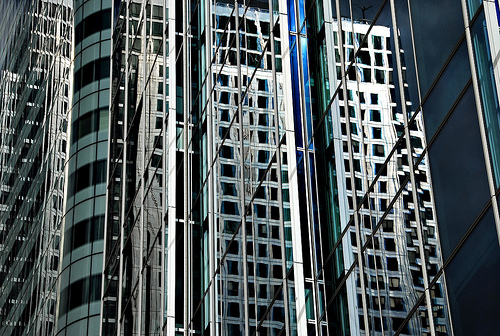 In the latest of our series on London’s financial markets, we look at the derivatives market and its history in the capital.

As the name suggests, a derivative is a financial instrument which is derived from another financial instrument and then traded as a product in its own right. One of the most common examples of this are futures, which we talked about in our previous guide to the commodity markets. In that case, the commodity itself is the product (known as the 'underlying') from which the future is derived.

Derivatives exist in all asset classes of the financial markets and are commonly used for hedging or speculating, so a company would buy currency forward contracts in order to hedge their risk of loss due to fluctuations in the exchange rate of two currencies. They're also one of the most brain-meltingly complicated to understand and can carry a huge amount of risk.

Derivatives are traded both on exchanges and Over The Counter (OTC). Exchange trading is either through 'open outcry' on the trading floor where traders shout prices to each other and use hand signals or through electronic trading systems. Very few exchanges these days are open outcry — in London only the London Metal Exchange (LME) still trades like this.

OTC trading of derivatives is a bit less transparent and a bit more risky. Privately negotiated, customised contracts are traded directly between buyer and seller which means each side is exposed to the risk of default by the other side. In reality, traders tend to use both OTC and exchange trading alongside each other to hedge their risk.

How does it work?

The previous installments of this series have covered the underlying markets, commodities, equities and foreign exchange. Derivatives contracts are traded for all of these, plus interest rate and credit (or debt) derivatives. Interest rate swaps represent the largest volume of trading, accounting for nearly 70% of the worldwide derivatives market.

What's an interest rate swap? In simple terms, it's a forward contract where two parties agree to exchange a fixed rate for a floating rate. This is where the benchmark London Interbank Offered Rate (LIBOR) comes in. Remember the recent LIBOR scandal where a number of investment banks were found to be rigging the rate? This basically means that traders were setting the LIBOR rate artificially high, resulting in loans to businesses paying increased interest rates.

Credit derivatives are instruments derived from the debt market. You may have heard the phrase 'credit default swaps (CDS)' in the news — these are the most popular and involve a buyer of a CDS making regular payments to a seller and receiving compensation if the loan defaults. The seller of the CDS takes possession of the defaulted loan. Foreign exchange derivatives such as FX swaps, forward contracts and options are also common in the market. They allow buyers and sellers to take advantage of changes in the price of a currency and again, hedge against risk.

So, say Londonist has decided to open a cake shop and we think that in three months time flour might be more expensive than it is now, which could affect our profit. We can protect ourselves against this by buying a futures contract for flour which means we've fixed the price of the flour we will buy, so even if the price goes up, we still pay the same.

If we wanted to use an option contract instead, we would merely be buying the opportunity to buy flour at a future date rather than the obligation to buy, as with a futures contract.

Who buys and sells derivatives...

Lots of people. The vast majority of financial institutions don't specialise in one asset class only — they buy and sell a wide variety of instruments to manage their risk and turn a profit. These can include fund managers, hedge funds, corporate treasurers and the government and are referred to as the 'buy side' of the market. Hedge funds in particular have driven the huge increase in derivatives trading volume in recent years — a hedge fund is an investment fund used by pension companies or high net worth individuals (otherwise known as the super-wealthy) to make profit on the money they hold, i.e. your pension fund. Broker/dealers will also buy or sell derivatives on behalf of their clients, making commission on the sale.

As we mentioned previously, speculation and hedging are the main reasons for people to buy and sell derivatives. While derivatives aren't inherently speculative or automatically risky, the biggest problems occur when they're misused, either because the buyers and sellers don't understand them or for fraudulent reasons. In 2011, Citigroup was ordered by US regulator the Securities and Exchange Commission (SEC) to pay $285m after the bank created a portfolio with risky mortgage-related investments, sold it to their clients and then bet against it. JP Morgan lost an eye-watering $2bn this year in the credit derivatives market through a series of mistakes and failures.

The rapid growth of the derivatives market has the side effect that fewer participants understand the instruments they're trading. The Beeb's Robert Peston, who many will remember as the narrator of the 2008 financial crisis, has 30 years experience in the City and claimed that even he couldn't understand the explanations of instruments like CDSs and collateralised debt obligations (CDOs).

Where is the London derivatives market?

London is the world’s biggest market for interest-rate derivatives, with $1.4 trillion daily revenue (46% of the world’s total). As with pretty much all of London's financial history, its origins can be traced to the Royal Exchange in the 17th Century.

Much of the trading is done between banks and brokers and the prevalence of the OTC market means there isn't a derivatives exchange as such. The London International Financial Futures and Options Exchange (LIFFE) was established in 1982 to allow market participants to better manage exposure to both FX and interest rate volatility.

In 1992 LIFFE merged with the London Traded Options Market (LTOM), adding equity options to its portfolio and a further merger with the London Commodity Exchange (LCE) brought soft and agricultural commodity contracts under its umbrella of instruments. LIFFE was then bought by Euronext in 2002 which created a single European market for derivatives. Trading of derviatives also happens on the London Stock Exchange, on an exchange called EDX London.

London's prominence as a leading global financial centre has meant it's been hit the hardest by the economic downturn — cutbacks have hit pretty much all the capital's major financial institutions. In turn, this hits the local economy and in January this year, a thinktank warned that the London property market would suffer from City job losses. And if those much-publicised bonuses aren't being spent on houses, you can bet that they aren't being spent on much else locally either. Businesses in retail, entertainment and leisure all suffer when people stop spending.

The final installment of Londonist's guide to the financial industry will give you an overview of the debt market — and how it all went horribly wrong.