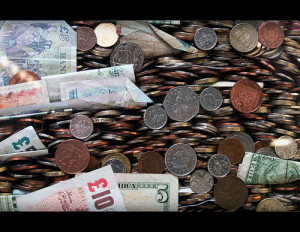 In our previous instalment of the beginner’s guide to financial institutions, we took a brief look at the history of the City and some of the main market participants. Over the next few weeks, we’ll bring you beginner’s guides to the various markets, starting with foreign exchange (FX).

Imagine you’re going to the Bureau de Change to get your holiday money. On the wall there’s a board with red neon numbers in columns next to a list of currencies and the columns are headed ‘buy’ and ‘sell’. Let’s say you’re going to Spain so you want Euros; you buy 300 Euros, which costs you £250. What you’ve just done is a foreign exchange transaction – you’ve bought one currency and sold another. Banks, brokers and other financial institutions do exactly the same thing, except on a much bigger scale. Where you bought 300 Euros, they will buy 300 million Euros.

Why buy so many Euros if not to fund a massive bender in Spain? Well, an FX transaction could enable a company in Japan, say, to import goods from the United States and pay US dollars rather than yen if the currency valuation is favourable. It also allows a profit to be made on inter-currency transactions, especially at the top level of the FX market, which is made up of the largest investment banks. Because they're in a position to trade huge volumes, the banks get a better price (measured in ‘pips’, or the difference between the buy and the sell price) than someone buying their holiday money.

Each country has its own currency denoted by a three-letter code – EUR (Euros), USD (US dollars), GBP (British pounds), JPY (Japanese yen) and CHF (Swiss francs) are the major currencies. These are valued at significantly more than, say, UGX (Ugandan shilling) or CLP (Chilean peso). The most often-traded pairs are EUR/USD and GBP/USD. Some FX trivia: GBP/USD is known as ‘cable’ in the industry, which originates from the 19th century when the exchange rate was transmitted via transatlantic cable.

The value of money

Like anything else that can be bought or sold, demand for a currency influences the price. So, one day you might pay £250 for your Euros but if you buy them a week later, they could be worth £255 — in other words, the ‘buy’ price is higher. Currency valuation depends on a variety of factors such as speculation (where someone thinks the price may increase and buys more of the currency, which has the ultimate effect of increasing demand and driving up the price), or a country’s business activities and economy. For example, if a country has high unemployment, people spend less on goods and services lowering gross domestic product (GDP) and, as a result, the value of that country’s currency.

Central banks (which we mentioned in the first beginner’s guide; they’re the daddy of banks) can also affect the value of a country’s currency by increasing the supply of money to suit the economy’s needs. The term ‘quantitative easing’ has popped up in the news quite a bit over the past couple of years. For most people, it’s another bit of impenetrable jargon and almost certainly somehow the fault of bankers. What the term actually means is that the Bank of England (our central bank) has decided to try and boost the economy by effectively conjuring up more money to buy assets.

So why is the ‘sell’ price lower? Again, it’s basic supply and demand. Assuming you haven’t spent all your holiday Euros boosting the economy of Spain by buying beer and donkeys with straw hats, you might decide to exchange your leftover Euros, in effect selling them to the Bureau de Change who buy them back and sell you pounds. A straightforward buy/sell transaction like this is called a ‘spot’.

The FX markets also do ‘forward’ transactions, which means that Bank A will agree to buy 20m Euros costing £1.20 each from Bank B, but the actual transaction will happen at a future date, usually Tomorrow Next (2 days), Spot Week (one week), two weeks, one month, three months, six months, nine months or 12 months. Why do they do this? Bank A, the buyer, gets to buy Euros at an agreed rate so even if the currency valuation increases before the transaction takes place, they still pay £1.20 for their 20m Euros while Bank B gets to charge a premium price for undertaking the risk that the currency value will increase. Obviously, if the currency value drops, then Bank B will make a profit.

London's place in the market

London is currently the most important financial centre in the FX markets and accounts for over 40% of global foreign exchange transactions with New York (19%) and Tokyo (7%) behind, so you can see why the government (and by extension the mayor of London) are quite keen to hang on to the financial industry. FX is a tremendously fast-moving market and operates 24 hours a day, five days a week. In April 2011 alone, FX turnover in the UK was $2,191bn. So based on this, we could be forgiven for thinking that a tax on financial transactions (or Tobin Tax as it’s often known) is a fantastic idea. It could raise a huge amount of revenue for the Treasury and only affects the banks, right?

Not quite. If the tax was imposed globally then it wouldn’t be a problem because all countries would be equally liable for it. But the governments in Asia and the US have opposed a financial transactions tax, so the upshot of imposing it in London alone is that the banks, brokers and hedge funds who contribute to that 40% would up sticks and move to Asia or the US where they aren’t taxed. And you may remember from the previous guide how important the financial industry is to London and the UK in terms of tax take, local economy and GDP. So when you think of it like that, prime minister David Cameron’s stance that he would only consider a financial transaction tax if it was applied globally looks less like a rampant capitalist Tory protecting banks than an attempt to look out for the interests of the country, doesn’t it?

FX is just one market within the financial industry, albeit the one with the largest volume and amount of money involved. Over the next few weeks we’ll take a look at some of the other market areas, including the one where it all went so wrong – debt.