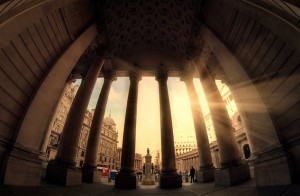 Can’t tell the difference between your bankers and your brokers, or your swaps and your futures? Let’s take a look at the main players in the financial markets and their place in the City of London.

London is one of the world’s three main financial centres – the other two being New York and Tokyo. It’s also the oldest centre, so there’s quite a bit of interesting history around the city (small c and large C). In fact, hardened London-dwellers will probably be familiar with more of it than they realise.

The first Royal Exchange was founded in the 1560s by Thomas Gresham and opened by Queen Elizabeth I, but stockbrokers, even back then, were notoriously unmannerly and were banished to coffee shops to ply their trade, leaving the Exchange for respectable merchants. Jonathan’s Coffee House in Change Alley was one of the first of these unofficial trading venues, along with its successor, Garraway’s. It performed much the same function as the London Stock Exchange does today; allowing companies to raise capital by selling shares in that company, now known as the equity market.

Sadly, Gresham’s Royal Exchange was destroyed in the Great Fire and re-established three years later but with a new and (for the dodgier brokers) unwelcome innovation: regulation. Parliament introduced an act in 1697 which imposed fines on the ne’er-do-wells but they simply traded in the street instead.

By the 19th century, a formal Stock Exchange had been established with a rule book and was pretty much an accepted part of London. The government at the time recognised the moneyspinning potential and used the Exchange to raise funds for the Napoleonic wars by getting investors to lend them money in return for interest payments on the loan and the promise of full repayment at the end of the loan period. This is what’s now called government debt and the reason why countries like Italy and Greece are in the news so much, usually accompanied by the word ‘default’. Basically, they are bad debtors and are unable to repay their loans.

Insurance is another integral part of London’s financial history yet is less well-reported than the stock market and banking. It also began with coffee, specifically in Lloyds Coffee House, but instead of rude stockbrokers, the building was frequented by sailors, merchants and ship owners seeking the shipping news.

One of Lloyds less savoury specialities was insuring ships that engaged in the slave trade, at the time a huge multi-national business. Some estimates suggest British shipping carried around 3.4 million people into slavery. Lloyds is also the home of the Lutine Bell. Back in the day, it was rung twice if an overdue ship turned out to be safe and once if it had sunk. Nowadays, Lloyds insures a wide variety of things, including the limbs of the rich and famous. The British may not excel at international football but our insurance firms cover about 25% of the world's merchant ships.

Banks come in three main flavours: central, retail and investment. Retail banks are where Joe Public have their personal bank accounts. Investment banks generally work for themselves – they use their own and customers' money to buy and sell to make a profit, though the recent banking reforms will in future mean that retail customers' money can no longer be used. Some banks, such as HSBC or RBS do both retail and investment, but the two sides of the company are pretty much separate entities in the way they operate. A central bank is the daddy of banks – it's government-controlled and acts as a lender of last resort if a retail or investment bank is about to go bust. Except in the case of Lehman Brothers in 2008, that is. It also sets base interest rates. The Bank of England is the UK’s central bank while the Federal Reserve does the same thing in the US.

Despite what we hear on the news, the financial industry doesn’t begin and end with banks, and not everyone in the sector is a banker (in the literal or rhyming slang sense). When you hear ‘bankers’ used as a term to describe people working in the industry, it usually means traders or executives. Traders account for a tiny percentage of a bank’s employees but are the ones who make much of the money. Trading is a high-stress, high-pressure job and a trader's sole objective is to turn a profit for their employer who will be utterly ruthless in getting rid of them if they underperform.

Executives are the people in charge, the strategy-makers and sometimes the public face of the bank. They also take the fall if things go pear-shaped – like the now ex-Sir Fred Goodwin formerly of RBS. Then there are the thousands of other employees who enable the whole enterprise to operate: the back office staff, the marketing people, the cleaners, the receptionists, the desktop support team, the project managers. Traders and execs are the A list celebs of the banking world and the others are the camera crew and key grip. They can’t function without each other but the former get all the money and fame.

So who else is involved if it's not all done by bankers? Brokers are the firms who slip under the media radar, leaving banks in the firing line for whatever financial catastrophe has occurred. They exist as an intermediary between buyers and sellers. So Bank A will call Broker B and say they want to buy Greek government bonds (as if!). Broker B will go off and find Bank C who just happens to have some of these bonds and if they agree on price, Broker B will take a commission for setting the whole thing up. Brokers also produce loads of research and analysis on the markets which they sell to other people.

Brokers tend to be privately-owned, unlike banks who are answerable to shareholders, so although they’re covered by the same regulations, if a broker goes bankrupt it’s unlikely to cause much of a ripple outside the industry. Heard of Lehman Brothers? Of course you have. Heard of MF Global? No? The difference between them is that Lehman was a big investment bank which went under while MF Global was a big broker that went under. The latter was barely reported outside of the financial industry despite apparently having mislaid $1.2bn of its customers’ money. The former sparked an international financial crisis and started a backlash against the industry that is still going on four years later.

Hedge funds are another major market participant, and they're the ones few have heard of. Whereas banks and brokers are traditionally found in the Square Mile and, in the past 20 years or so, Canary Wharf, hedge funds are often based in the posh bits of London like Mayfair, where they keep a pretty low profile. They provide an opportunity to ‘hedge’ investment risk to pension funds, high net worth individuals (AKA the filthy rich) and other enormously wealthy institutions, in lots of different ways that are brain-meltingly difficult to describe.

Every now and again, some financial institution will threaten to flounce from the UK over regulation or whatnot. The flounce threat is often responded to by the general public saying ‘go on then, see if we care, you bunch of bankers’. Here’s why we should care. Britain’s GDP (Gross Domestic Product, or the monetary value of all goods and services produced in a country) comprises agriculture (1.4%), industry (22.1%) and services (77.1%). By far the biggest contributor to the services bucket is finance and banking. The City’s contribution to the UK’s tax take last year was an estimated £63bn, which is 12.1% of the total UK tax take. A one-off tax on bonus payments raised £3.4bn for the economy.

Does this leave us over-exposed? Yes. Does this mean we should pander to the finance sector’s every demand? No. For an organisation such as HSBC which employs 8,000 people at its Canary Wharf HQ, upping sticks is no small matter. Banks also don’t exist in a vacuum – they require a tremendous amount of support from other industries such as IT, telephony, facilities management, news and financial data providers. The list is long, and the knowledge of their staff is highly specialised. Their contribution to the local economy is also important. Imagine London with over 300,000 fewer people spending money in it. Sure, the bars at Canary Wharf might be less crowded but that would be a fairly big loss in a wide range of industries from property to entertainment.

So, that’s Londonist’s potted guide to the City and finance. In future weeks we’ll take a look at some of the markets within the financial industry, hopefully in a way that won’t send you to sleep or into a towering anti-capitalist rage.