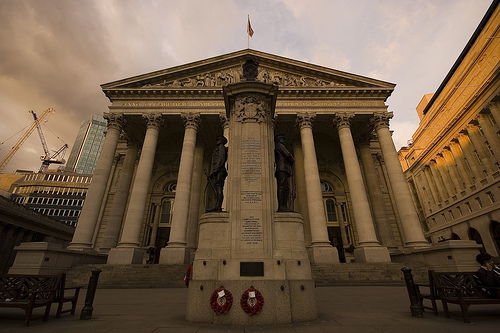 In the latest of our series on London's financial markets, we look at the equity market and its history in the capital.

What is the equity market anyway?

Ever heard the phrase "stocks and shares"? It's one of those financial terms which, like the popular image of a 1980's trading floor filled with shouty men in red braces and stripy shirts, remains something of a catch-all. A share represents part-ownership of a company while stock refers to the general market.

A company can issue shares in its ownership to raise money for expanding, developing new projects or building new factories so they can become more profitable. The people who own these shares become shareholders, or part-owners. It's often called "going public" and the share issue is called an Initial Public Offering (IPO).

So, who got Facebook shares? Facebook raised around $16bn on Thursday 17 May by selling 421 million shares at $38 each. For those people who bought shares, congratulations, you now own a tiny bit of Facebook. But what do you get in return apart from a glow of satisfaction and a lighter wallet? Being a shareholder entitles you to a dividend, or part of the company's earnings. The more shares you have, the greater your dividend. You also get to go along to the company's Annual General Meeting (AGM) and vote for your favourite director on the board in a kind of corporate X-Factor.

By issuing shares, a company gets listed on a stock exchange. The company must jump through all kinds of regulatory hoops to demonstrate that it is financially solvent and complies with some pretty stringent legal requirements. It's an expensive process and can take up to two years to prepare, so it's not something a company undertakes lightly.

There are strict rules around what directors of a listed company can and cannot do. The latter includes insider trading, which is using inside knowledge to make a profit from your shares. Say a company is about to issue important news that will push up the company's share price. The director will know in advance. Were it not for insider trading laws, he or she could buy shares at the pre-announcement price to sell afterwards at a higher price. Insider trading is illegal and anyone caught doing it can face hefty fines and a spell behind bars. It can be difficult to prove, but the Financial Services Authority (FSA) recently charged seven people with insider trading.

Shares are bought and sold on exchanges, like the London Stock Exchange (which we gave some background on previously). Here, sellers offer their shares for buyers to buy. Trading is done electronically, and has been since 1986. The LSE previously had open-outcry which, as the name suggests, involved lots of shouting and hand signals (no, not those kind of hand signals) to buy and sell.

In the past, shareholders got a certificate to represent their holding. Nowadays, ownership is registered electronically. Buy and sell prices are determined by a variety of factors, including news about the company, demand for shares in a particular sector and speculation on future prices. Bad news can cause a company's share price to drop dramatically — in 2010, BP's share price dropped in the wake of the Deepwater Horizon oil spill, which made international headlines and damaged the company's reputation. Good news, such as a better-than-expected profit or a company announcing that they will create jobs, can push the share price up.

The relationship between certain industries also affects share prices. For example, when oil prices rise, airline share prices can fall as companies are obviously heavily reliant on jet fuel. The higher cost of oil is then passed on to the customer through fare increases. The share price rises again.

But who's doing all this buying and selling? Unlike the vast majority of other financial markets, in the equity market the general public can get stuck in and buy shares themselves. Most high street banks have share-dealing services where you can buy and sell whatever shares you fancy. If you chose, you could find yourself the proud part-owner of your favourite football team, though we're not sure how welcome you'd be in the manager's box.

As with the buying holiday money example we looked at in the Foreign Exchange (FX) markets guide, the size of the transaction is where investment banks and other financial institutions differ from high street buying and selling. A bank will buy tens of thousands of shares in one transaction and the volume of trades reflects the supply and demand for stocks.When volume is low, the gap (called the "spread") between the buy and sell price is wider, forcing the seller to accept a lower price in order to move the shares, hence why share prices can drop so quickly.

Anyone who listens to or reads the news regularly will have heard a phrase along these lines: "The Footsie closed down five points today at 5800". The Footsie is the Financial Times and Stock Exchange (FTSE) index. The stock market groups companies and their shares into indices depending on their value to the market (known as "market capitalisation", which is the share price multiplied by the number of shares outstanding in that company).

As we've mentioned previously, London is one of the most prominent financial centres in the world. London's stock exchange is the fourth largest in the world after the New York Stock Exchange (NYSE) and NASDAQ in the US and Japan's Tokyo Stock Exchange.

Although not the oldest stock exchange in the world (Amsterdam takes that particular prize, having been established in 1602), London has had a stock market since 1698, when a list of stock and commodity prices was issued at Jonathan's Coffee House in Change Alley. Just a few years later, the stock market experienced the first in many of the boom-and-bust cycles which the industry has become known for — the South Sea bubble. The South Sea Company became the subject of ferocious speculative buying of its shares, which inflated the price way beyond what the stock was worth. Sound familiar? The dotcom boom of the early 2000s saw similar hype around technology companies with a subsequent crash.

The London Stock Exchange as we know it was founded in 1773 when a group of stockbrokers decided to erect their own building, complete with dealing room, before moving to formal membership in 1801. It now has nearly 3000 listings and a volume of $1.7 trillion.

Previous installments in the series: London Financial Institutions: A Beginner's Guide and The Beginner’s Guide To Financial Markets: Foreign Exchange.