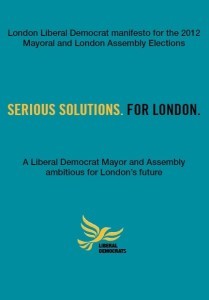 The Liberal Democrat election manifesto was officially released this week. With the title 'Serious Solutions For London', Brian Paddick is clearly keen to give Londoners the benefit of a subject close to his heart: crime and policing. He's also been notable in the run-up to the elections for his reluctance to get involved with the Ken/Boris shenanigans and while his manifesto does make reference to failures of both former and current mayors, it's not central to his campaign.

We'll highlight some of the key areas of the manifesto, but the basic message appears to be that the Lib Dems are in touch with ordinary Londoners and plan to run the capital in consultation with its residents.

Crime
Obviously, Brian's long service in the Met allows him to bring a great deal of knowledge to the table and readers of his autobiography will know that he's very keen on working with the community. Like his fellow candidates, he wants to put more police on the streets and increase visibility of officers at high-risk areas but also protect neighbourhood policing by guaranteeing staffing levels in Safer Neighbourhood Teams. Closure of local stations is a no-no too — he's promised at least three stations per borough and a devolution of resources which will give local residents more say in where police are deployed.

Brian has had a couple of high-profile crime fighting campaigns which you may have seen posters for: You Break It, You Fix It which does pretty much exactly what it says on the tin — criminals on payback sentences will have to repair damage caused by vandals or lose their benefits. He's also spearheaded a campaign against rape and violence against women in an attempt to improve the deplorable conviction statistics for sex crimes.

'Paddick Patrols' are another key area in Brian's crime fighting agenda (though we do hope he's not going to go down the Boris route and prefix everything with his name); he recently announced that he wants residents to get stuck in with patrolling their own neighbourhoods. On public transport he wants to get night buses to stop on request near travellers' homes, which will be a huge relief to anyone forced to go miles out of their way on a night bus and then walk home from the bus stop at the same time as attempting to spot potential muggers while drunk. Also under the crime tag are the usual promises regarding eradication of racism, cutting waste and being more transparent.

Economy
With a sideswipe at the former Labour government, Brian acknowledges that Londoners are worse off financially and invokes the Lib Dem contingent of the coalition as back-up for his plans to put more money in our pockets. We can't help thinking he might be slightly optimistic there — Nick Clegg's half of the unholy union between right and centre hasn't proved to be much cop at getting their way so far. But Brian wants to make it better. So, he promises to create a One Hour Bus Ticket so people can transfer on buses as they can on the Tube and rail while paying only one single fare. A Part-Timers Travelcard and Early Bird fare aim to reduce travelling costs for part-time workers though we think a promise to review fare zones may be a tad ambitious but like Ken, Brian wants to make fares fairer.

As well as the usual stuff about holding down council tax and eliminating waste, extending the London Living Wage, addressing high rents and tackling London's high youth unemployment, we're also treated to this nugget of information — "Go eight stops east on the Jubilee Line from Westminster and your life expectancy falls one year for every station" — surely alarming news for anyone in the Canning Town vicinity as well as people commuting in from further east. Interestingly, Brian proposes a voluntary £1 a night luxury hotel bedroom levy on London's three- to five-star rooms in London to raise £10m for funding youth opportunities. We think it sounds like a nice idea but being voluntary we wonder how much it would actually raise. Getting big businesses to be more involved in the local community is balanced with a desire to increase London's creative jobs.

Transport
It's not good news for tube users — Brian is advocating block closures to speed up upgrade works on the underground and we think that some of his other promises might be difficult to achieve. For instance, if it was that easy to stick an extra carriage on the most crowded routes, wouldn't TfL have already done it? Also on the agenda is extending the tram to Sutton, Streatham and Crystal Palace, extending the Bakerloo line south to Camberwell and beyond (a regularly resurfacing promise) and improving key transport interchanges such as at Ealing Broadway with Crossrail.

His intentions over HS2 are less clear - he says he plans to 'lobby central government to ensure the
impact on London of the proposed new high speed rail (HS2) is minimised' but it's kind of hard to see how much he can limit the impact of a mainline railway track through one's garden. And he's keen on Crossrail 2 (Chelsea to Hackney) the route for which is undecided. Many of his other transport promises are intangible: statements like 'work to secure the funding of', 're-examine the cost-benefit of' and 'consider additional river crossings' which the politically-savvy amongst you will no doubt be revisiting in future campaigns. For anyone following the foreign embassy/congestion charge saga, Brian also plans to pressure foreign embassies and diplomatic missions to pay the £60m they owe in unpaid congestion charges. Though Boris made a slightly bigger headline over this.

For road users there's the promise to increase the congestion charge in line with rail fare rises, promote walking and cycling, extend 20mph speed limits, increase accessibility the disabled including Dial-a-Ride improvements and brilliantly; 'stop greedy boroughs using parking fines as a source of revenue rather than sensible traffic management' not to mention 'enforce penalties against those few cyclists who ignore red lights, cycle on pavements and use mobile phones'.

Housing
Brian finds fault with both Boris and Ken on this by pointing out that 'The current mayor scrapped his predecessor’s target that 50% of new homes should be affordable but the previous mayor’s fixed target
was often not met anyway', while promising a new London Housing Company to match public land with
private investment and new funding from private investment. There's nothing particularly new or exciting in what's basically a promise to provide 'more affordable housing' but a pledge to challenge banks to lend to those who can afford sounds both difficult to achieve and worryingly like the beginnings of the previous credit crunch. However, working with boroughs to bring London's 50,000 empty homes (a long-running source of frustration).

Environment
In common with the other candidates, air quality is a key issue in Brian's manifesto and he wants to designating a new clean air zone in central London to deter polluting vehicles (read: charge more) as well as promoting local hydroelectric schemes on the River Thames but apart from use the purchasing power of Transport for London to commission additional renewable generating capacity so the Underground
can become sustainably powered we don't see much different from the other candidates' manifestos.

Recycling is obviously a target though, with promises of targets set for packaging, food waste collections (we thought this was already in place?) a London-wide online swap-shop (Freecycle by any other name) and yay! A plastic bag levy. Trees, protection of playing fields, promoting food growing and expanding the Fresh Carts scheme to bring fresh local produce to London will appeal to the green-fingered.

Culture
Lastly, Brian and the Lib Dems are keen to maintain London's reputation as a cultural centre, ensuring that price or elitism are not a deterrent. The Olympics and its legacy forms a tiny part of Brian's manifesto and almost appears as an afterthought with a promise to ensure access to local residents and maybe employ the jobless.

It's clear where Brian Paddick believes Londoners' concerns lie - crime, transport and the environment in that order and he's probably not that far off the mark. It's also refreshing to see a manifesto which doesn't anchor itself on criticising opponents' campaigns.