Brian Vs Boris Vs Ken: Battle Of The (Auto)Biographies 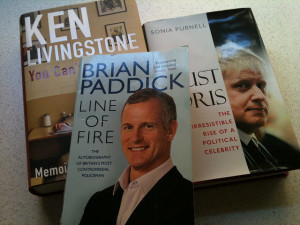 It says a lot about the nature of the Mayorship that the three of the main candidates have books about their lives. Both Boris and Ken have been the subject of various biographies: the latest to study Boris is Sonia Purnell's Just Boris, whereas Ken's brought out his own version of events, You Can't Say That. Brian Paddick's autobiography, Line of Fire, was published in 2008 just as he prepared to run as Lib Dem candidate.

Obviously, autobiographies are biased in favour of the author and a biography is dependent on the view of the author. However, even though Sonia Purnell's Twitter feed is a bit left wing, the book is fair, including plenty of quotes from friends and sympathisers, and not at all the hatchet job Team Boris suggested on release.

Childhood:
Alexander Boris de Pfeffel Johnson is the eldest child of Charlotte and Stanley Johnson, born in New York on 19 June 1964. The growing family (sister Rachel and brothers Jo and Leo followed) moved around a lot, living in various parts of the UK, Washington DC and Brussels. The young Boris was sent to boarding school before Eton. His father had affairs and his mother suffered from depression; they separated in 1978.

Kenneth Robert Livingstone was born on 17 June 1945 in Streatham to a former dancer mother and Scottish father. He nearly died of gastro-enteritis as a toddler and his love of amphibians started in his early teenage years.

Brian Leonard Paddick was born on 24 April 1958, 11 years after his older brother Graham and an hour after his twin John. He grew up in Mitcham and Tooting.

Education:
Despite Boris's penchant for Latin phrases and classical metaphor, Brian is actually the most educated of the three. He went to Sutton Manor High School, failed to get into medical school and joined the police at 18. The Met gave him the opportunity to study PPE at Oxford (he got a 2:1), an MBA at Warwick and a postgraduate diploma at Cambridge. Boris was a King's Scholar at Eton (a kind of scholarship; despite the image Boris and his family are nowhere near as rich as some of the other Bullingdon Club members in the cabinet) and followed it up with a 2:1 in Classics at Oxford. Ken failed his 11+ and went to the local comprehensive where he got four O Levels. He later studied in Social Biology at a teacher training college.

Career:
After working at a cancer research lab Ken got involved in politics, getting elected to Lambeth Council in 1971 where he immediately got onto the housing committee. He was elected to the GLC in 1973, becoming leader in 1981 until Thatcher abolished it in 1986. He was then elected MP for Brent East, standing down at the 2001 election after becoming Mayor in May 2000.

Brian Paddick served his time as a bobby on the beat but was one of the officers selected for fast tracking through the ranks. He's done his share of administrative and policy roles, but it was as Commander at Lambeth that he became well known. The press went to town over his engagement with Brixton's Urban 75 website and Lambeth's policy of issuing spot fines for cannabis rather than arresting people. He reached the rank of Deputy Assistant Commissioner before resigning after disagreements with Commissioner Ian Blair about who knew what and when about the shooting of Jean Charles de Menezes.

Interestingly, both Ken and Brian had the opportunity to take positions outside London that could have made their career rises easier or faster, but both wanted to stay in the capital.

Boris started out as a journalist and, after being sacked from The Times for making up a quote, moved to the Telegraph where he coined that brand of 'straight cucumbers' anti-EU story beloved of the right-wing press. He was editor of The Spectator from 1999 until becoming Shadow Minister for Higher Education in 2005. (Boris became Henley's MP in 2001 after failing to win Clwyd South in 1997.) He'd also been Shadow Minister for Arts and Tory party vice chair until being sacked in 2004 over his affair with Petronella Wyatt. He currently gets £250,000 a year for writing his Telegraph column.

Sex:
This is what we read biographies for, right? Screw the politics (pun sort-of intended). Boris is renowned for his affairs, but the section about Petronella Wyatt's abortions still makes for very uncomfortable reading. Rumours of an affair ruined the career of journalist Anna Fazackerley; and Pierre Rolin, who put up money for the ArcelorMittal Orbit tower, is fuming over his (now former) girlfriend Helen McIntyre's baby, who bears a distinct resemblance to the Mayor. All of these women, including his wife Marina, remain fiercely loyal to the blond one.

Ken Livingstone offered his sperm to two female friends to father three children before having two with his now wife, Emma. Despite tabloid rumbles about absent dads, he's taken an active interest in their upbringing.

Despite being gay, Brian Paddick was married – to a woman – for five years while he struggled to come to terms with his sexuality. He's also remarkably open about suffering domestic abuse at the hands of the boyfriend who later sold lurid tales to the tabloids during the Brixton/Urban 75 feeding frenzy.

Controversy:
Both Boris and Ken are no stranger to everyone and his goat having an opinion about them. No doubt when Boris writes his own autobiography (we're in no doubt he eventually will) he'll set a number of records straight. Until then we turn to Ken, who is unmatched in his ability to inspire loathing in print. Much of the vitriol seems to have its roots in the Left's People's Front of Judea-style infighting back in the 70s and 80s; reading the smears coming out of the Labour party during the 2000 election we can't believe he ever rejoined.

Meanwhile, most of the stuff thrown at Brian during his years in Lambeth and during the Stockwell investigation seems likely to have its roots either in homophobia or just the tabloid love of making shit up to sell papers.

What are they like?:
Boris comes across as a highly intelligent man who's grown used to coasting along on his brains and charm: perenially late in person and for deadlines, he often dumps work and inconvenience on others – but they forgive him every single time. That must be some powerful personality the Mayor's got. Don't be entirely fooled by the bumbling persona. He's got a core of steel and can be utterly ruthless.

Brian is at such pains to come across as an open, honest, decent guy that part of us wonders if he protests too much. Being liked seems important to him, and he's definitely the least likely of the three to stab you in the back.

And Ken? He's massively nerdy, has an excellently dry wit and a nice line in self-deprecation (surprising to anyone steeped in the lore of his arrogance) and seems like he can harbour a grudge. His real self, however, remains a mystery.

We didn't know that:
Brian Paddick is mates with David Furnish, in his youth Ken Livingstone nearly died of dysentry as he hitch-hiked across Africa (for a while in the company of an ostrich) and Boris Johnson was severely deaf until he was about eight years old when operations solved the problem.

Which should you read?:
Each book has its merits. Line of Fire isn't going to win any literary awards but is an interesting insight into the Met during some of its recent crises. If you're really into local government, You Can't Say That's first half will be your meat and drink; but otherwise we recommend you read up to when Ken gets back from Africa then skip forward to c1997. As a book, Just Boris is an easily readable treat. As an insight into our Mayor, it's fascinating.