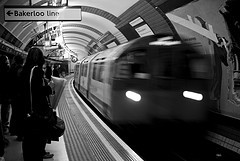 Photo / edwardkimuk
Improbable as it may seem, Labour's parliamentary candidate for Streatham, Chuka Umunna, is lobbying TfL to extend the Bakerloo line into the bright Zone 3 wilds of his 'hood.

As a potential vote-winner it's ballot-box gold, but is there any chance of it happening? Umunna is using TfL's transport strategy consultation to push the idea forward. Citing Boris Johnson's idle mention last year of an extension to Bromley via Lewisham (itself an idea borne out of the more clement economic conditions of the 2005/06 Transport 2025 document), the prospective MP argues, if it's going to Lewisham — which already has a DLR station — why shouldn't Streatham get one?

A Bakerloo line extension to Camberwell has waxed on and off through the decades — a 1949 Tube map even featured it as a "proposed line". The Streatham extension would run through this fictive station and Herne Hill, opening up a vast swathe of south London long ill-served by public transport, as any local will readily drone on about if prompted. The movement already has a petition, a (sporadically updated) blog, and the goodwill of locals.

In reality there is little chance of the extension being built, despite Chuka's chutzpah. Yet if there's anyone who could pull it off, our candidate here could do it — he's been dubbed by some as a potential 'British Obama' (put it down to his mixed Irish / Nigerian background and lawyer's education), and was cited by the New Statesman as one of ten people who could change the world. If he can just improve the transport prospects for Streatham-ites, that'll be good enough for now.