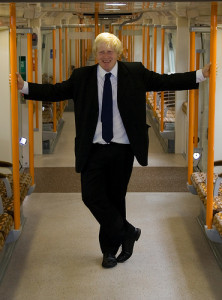 After last week's fanfare to announce Boris Johnson's nine point plan for London, the mayor has elaborated on point eight of his plan; cutting tube delays by 30% by 2015. Let's take a look at what the blond one's proposals are:

This is all great stuff and it's nice to see some practicalities being discussed rather than woolly high-level 'we will make stuff better' type promises (though there is a certain amount of that). We do wonder though if some of this is already in place within TfL albeit under a slightly different guide. For example, we find it hard to believe that TfL don't already have an incident response team in place and that Boris's plan is basically to shuffle them about so they're all in one office.

We also note that the mayor couldn't resist having a pop at the PPP which as many will remember, was brought under the TfL umbrella in 2010 and subsequently described by Boris as a 'colossal waste of money'. He's also not missed the opportunity to highlight his promise to invest in infrastructure over Ken's pledge to shave 7% off fares. Other transport pledges include completion of Crossrail, expansion of the cycle hire scheme (which went east last week) and London's orbital rail network. More info here.