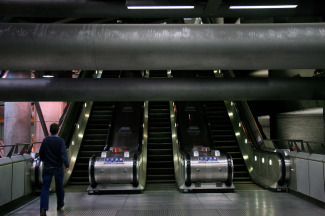 Image by SabineThoele from the Londonist Flickr pool
We understand it's generally frowned upon to begin a post with a torrent of swearing, but even so: fucking hell. Boris Johnson has managed to do what even Ken couldn't and find a way out of the appalling PPP mess - he's bought out Tube Lines.

Faced with the private sector demanding an extra £400m to complete upgrade work, Jubilee Line closures stretching on forever plus early Northern Line closures, it seems the Mayor lost patience and decided to buy the shares held by Bechtel and Amey for £310m, making Tube Lines a wholly owned subsidiary of TfL.

This was all agreed a couple of weeks ago but couldn't be announced until after the general election - presumably because it's Gordon Brown's fault we were stuck with PPP in the first place. But now we're free of what Boris is calling "the perverse pressures of the Byzantine PPP structure", and Paul Waugh in the Evening Standard hears that the number of line closures can now be reduced from 84 to as few as 12.

TfL says the deal won't cost us a penny - at a stroke, they've lost the middle men, the need to pay management fees, and TfL can also negotiate lower long-term debt repayments. London Underground will take over upgrade work, using the private sector when necessary (TfL's press release mentions Amey as a possible contractor, but pointedly not Bechtel). Blimey. As the Tories negotiate for power nationally, has their flagship Mayor taken a lurch for the left?