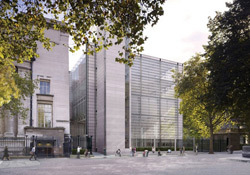 Decisions on two major museum extension projects were announced yesterday, with news both good and bad.

Let's get the bad out of the way: the proposed new wing of the British Museum was unceremoniously shot down by Camden Council. Despite planning officers, Cabe and English Heritage all in support, the council's committee rejected it on the grounds that it is, in their words, a "massive over-development" that would have an adverse impact on local buildings.

Better news, though, from Greenwich: the extension to the National Maritime Museum has been granted planning permission and listed building consent. The £35 million wing, which will be named for billionaire shipping magnate Sammy Ofer, who stood up most of the money, should get underway later this year.

This ray of good news, though, is overshadowed by grim tidings from the Department for Culture, Media, and Sport, which admitted earlier in the week that there's a £100 million hole in the budget, a shortfall that could see major expansion projects cut. There's not too many philanthropists with the munificence and financial heft of Sammy Ofer out there, so our cultural institutions may need to grow accustomed to more modest expansion projects for the next few years.