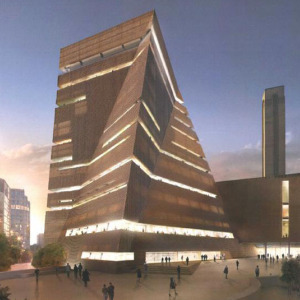 Plans for the Tate Modern extension, by Herzog & de Meuron
Damn you, recession! Not content with rising unemployment, enormous public debt and letting the bankers get away with it, now you want to take away our fabulous museum extensions as well? You won't be happy until you've sucked every last morsel of joy out of life, will you recession?

*ahem* Culture Minister Barbara Follett told the Times that £22.5m of public money promised to the British Museum for its extension is no longer guaranteed. The development is described as "shovel ready" with two-thirds of the funds pledged - but that includes the government's pile. And with DCMS suddenly realising they're overcommitted, cash for the BM, Tate Modern's controversial extension and a new multi-screen film centre for the BFI is all looking a bit dubious. Thankfully the Natural History Museum's new Darwin Centre was finished before these worries, and was unveiled today (you can see it for yourself from 15 September).

And if you're sitting there thinking that the BM already has plenty of bloody room, what do they need a £135m extension for; well. Recent blockbuster exhibitions like the Terracotta Army and Shah' Abbas have been held in the Reading Room; but planning permission for that arrangement runs out in 2012 and looks unlikely to be renewed.

Government money was only ever part of these plans, but raising over £100m between the three projects from private hands looks so tough that the BM is willing to name bits of the new build after donors. If we all chip in a fiver, do you think we could get the Londonist broom cupboard?